When it comes to games, I usually don’t do well under stress. I get too excited and start yelling or bouncing, which is bad when playing games that require a lot of cool-headed precise movement. Dropple is one such game, a port of the popular Flash game, totally reworked and retooled to take advantage of the iPhone’s accelerometer.

For those of you who haven’t played Dropple online, it’s a bit like the old classic Breakout combined with Mario. You play as Dropple, a featureless white ball who’s quit his stodgy desk job in favor of picking up coins on the dangerous streets. Through careful tilting, you can bounce Dropple along various platforms to collect your riches, but be wary. One false bounce will send you plummeting to your death through numerous gaps in the platforms, and every platform behaves differently.

Some platforms will break when you hit them, others send you rocketing skyward, and that just for starters. Unless you learn to anticipate their behavior and use it to your advantage, you’ll almost certainly fail. Thankfully, the accelerometer controls are remarkably smooth and responsive. I’m generally not a huge fan of tilt controls, but these are definitely worthy of some praise. This is important, because while Dropple is a crazily addictive game, it’s also extremely unforgiving.

No, really, playing this game was something akin to masochism for me. I died an absurd amount, growing more and more frustrated each time. There are 50 levels total, all of them quite short, but you only get one life per level, and it’s heartbreaking to finally make some headway only to go crashing into oblivion. Although 50 sounds like a lot, it really isn’t in practice, so the replay value of the game is limited at best, but if you’re anything like me, you can be stuck on a single level for a very, very long time. 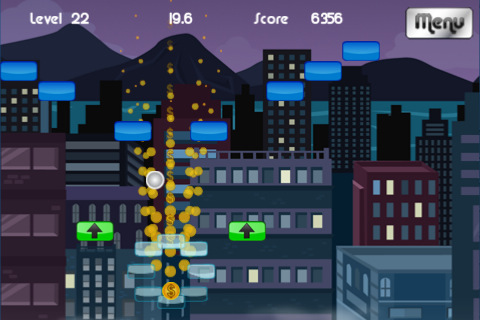 Likely because of this, the soundtrack quickly got old very quickly for me. Another small annoyance was the lack of saved-state for iOS 4 multitasking, but this was a minor complaint, and somewhat made up for by a strong OpenFeint presence.

The graphics struck me as perfectly reasonable on my 3GS, but I do know they’re not Retina updated. That said, it’s not a particularly graphics heavy game, so I hope the developers are working harder on getting more levels out than updating the graphics.

Because of my laughably poor tilt control skills, hopefully you’ll understand what I mean when I say I enjoyed Dropple while also hating it with every fiber of my being. It’s the kind of oddball challenge that keeps you up at night and is by turns deeply satisfying and deathly frustrating.