Max Vector is a side scrolling game where a space ship flies though a forest on Earth while destroying space-aliens… Ok, so it sounds a bit out of place but that’s beside the point. This is a iPhone, iPod touch, and iPad game released by Polygame digital for $0.99 (8/15/10). There is also a LITE version available.

The game is a throwback to the classic side scroller shooter games where you pilot a ship and blow stuff up. With Galaga graphics and R-Type/Gradius style gameplay, this game really hits the nostalgia factor.

Controls are relatively solid. To move the ship, you have to touch the ship itself and drag it around. To fire, you press a big red button that looks just like the old arcade machines. Controls take a bit to get used to but the enemies are pretty slow and easy to kill, so they almost act as a tutorial for much of the game. The music is nice and retro and is well done overall. 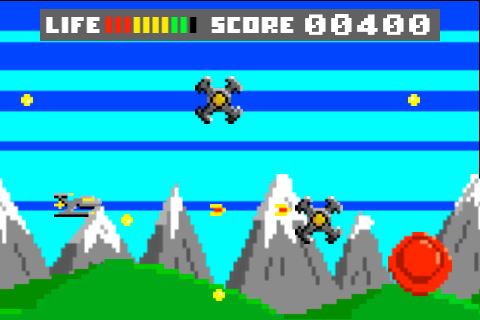 The bosses play the biggest highlight of the game. They are extremely predictable after a few seconds and yet they are the toughest part of the game. First, the first level boss is a massive difficulty jump with its 2-4 projectile firing, a homing red ball of death, a big red ‘hit me’ target. This is where the game hits a huge road block. After you die, you have no continues, no checkpoints, and you have to wait a very long time for the ‘continue’ button to finally show up. Then you have to play through the level again to just get back to the same boss. Better not die again or you’ll have to do it again. This game punishes you way too harshly for dying.

This game has balancing issues since the normal enemies are incredibly weak, predictable and easy to evade, and yet the bosses will wipe your health down with a few mistakes in guiding your ship with your finger.

I should mention the game did not start up for me right away. I had to read the description in the AppStore to find out that due to there being too many apps running on the phone, the game will not start and have crashing problems. This is, and I quote “NOT a problem with the Max Vector application.” I ask you then, why every other app I own, including the fact that I am a reviewer where I can go into a half dozen games in a few hours, all work perfectly fine with no crashing and no startup problems?

And I quote: “Again, this is NOT a problem with the game itself, it’s simply a case of too much memory being used at any one time and can affect any iPhone game application.” See, this is where you should really say that “If you can’t start the game or if you are having crash issues, just restart your iPhone then run the app. We apologize for the inconvenience” that would have brought up less chances of someone like me pointing this out.