There aren’t many games I would describe as a speedy hack ‘n’ slash/RPG-esque side-scroller, but that fits this one to a T. Fastar is a bit like combining Sonic the Hedgehog with Zombieville, and then tossing in angry squares and really big Final Fantasy swords for good measure. Suffice to say, the game is a little on the crazy side, but it’s also a lot of fun.

You, the big-sword wielding hero, must run through levels, slashing at enemy squares. There’s no real reason for any of this, so just imagine that the squares are mean and deserve to be smashed. Defeated squares will explode into a shower of coins, which you can use to purchase upgrades in the towns you occasionally run through along the way. If you get to the very end, there will be a crowd cheering for your speedy spectacular self, and you can feel very smug and triumphant that you’ve destroyed the malevolent geometric shapes in your path. 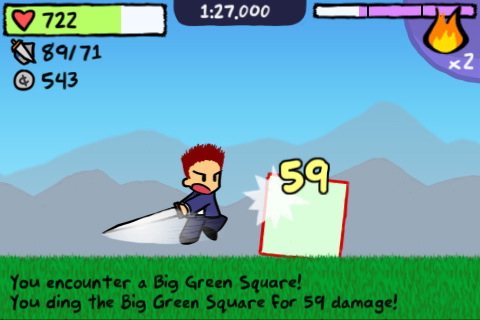 Controls are very simple and near perfect. To run, tilt the device, and then tap to slash at the squares. You can also tilt quickly to lunge, and there is the occasional magic spell to cast. Instead of acquiring magic along the way as in most RPGs, you select a single, slowly-recharging magic spell at the beginning of the level. Spells have sweet names like FIAR to set enemies on fire or BEEF to make yourself stronger, but they only stick around for one level, so you can’t get too attached.

In general, everything about the game is very quick, so don’t expect the usual RPG grind. Each game is self-contained and really only lasts about 5 minutes, give or take, without any story, so it’s just all action all the time. This makes it awesome for a fast and furious gaming session, but try to play for any extended amount of time and you’re going to be disappointed by the repetitiveness of the game.

Indeed, the game’s greatest strength turns out to be its greatest weakness as well. Although Fastar is absolutely superb for pick-up-and-playability, it can get old very quickly, as there’s very little variation between levels and every enemy is just a square. Different colored squares do have different behaviors though, so there’s more variety amongst them than I would have expected.

The doodle-esque graphics are bright and cheery, but nothing to get particularly excited about, although the simple, hand-drawn style and sense of humor is fitting to the overall stripped-down appeal of the game.

Everything about Fastar sort of thumbs its nose at convention, so come in for a brief, intense bubble of a good time, just don’t expect it to last for too long.

Here is a video demo of the Fastar! app on the iPhone