So the Chop Chop theme has had Ninjas, Runners, and Tennis, now it’s Gamerizon Studio’s entry into Soccor. Chop Chop Soccer is a soccer game for the iPhone with the Chop Chop characters where you use flicks and finger slides to move, shoot, pass, and steal as you try to gain a high score by beating your opponent. This app is available for the iPhone, iPod touch, and iPad for $1.99 at the time of review. 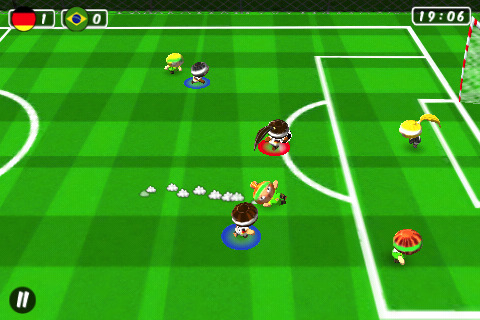 This game comes across as a fun little soccer game. The graphics are extremely bright and all the characters are in a Powerpuff Girls style art style. The sounds are simple and during gameplay it’s actually pretty quiet, but you are concentrating on playing, so that doesn’t really matter.

There are different colorful fields to play in with a variety of patterns and backgrounds. Each level has really nice art, though many of them feel oddly empty since most of it is filled with solid colors. I would have really liked to see more textures and maybe more set pieces.

The controls are simple. You touch and drag your finger to move your team around the field. While controlling the ball, you can drag your finger towards a team mate to pass and drag it towards the goal to shoot. Unfortunately, this can become a rather difficult process in the beginning since the touch sensitivity can and will make the mistake of thinking your slight touches mean to shoot the ball randomly. The controls eventually become more comfortable as you play, but maybe an alternative control scheme would have been better since my big giant finger blocks the screen of most of its action for a good majority of the time anyway, so maybe a small controller joysticks at the bottom would have made it easier to use. 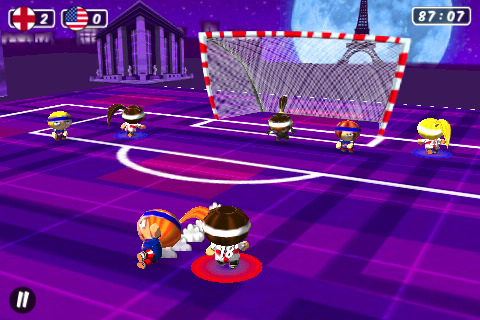 One thing I really like about Chop Chop Soccer is its 3 different camera settings. As minor as that is, being able to change it to a Fifa-style overview look, a 3rd-person-action-game-view, or a tracking camera that zooms in on the ball controller, makes all the difference in the world when you are trying to get comfortable with the controls.

Overall, this isn’t a bad game. It’s cute, it’s fun, but I wished for a better interface with maybe an alternate control scheme and maybe more care in the decoration of the backgrounds. Right now, they colors don’t even match the field or the colors of some of it’s set pieces… which is weird. Maybe a stadium crowd in bleachers sitting next the field to give that actual soccer feel? Maybe a park with playgrounds and people randomly walking around for a more “kids playing in the park” feeling?

Chop Chop Soccer a challenging soccer game with kid-friendly characters and big bright graphics, and definitely worth checking out.