You know, whenever you play a game with food as the main theme, never do it when you are hungry. I tell you, I can almost smell the food sometimes. It’s like I torture myself, haha. Plates is a time-reaction game where you add sauces to different plates of food and try to match the right sauce to the right food to increase your score which can be added to OpenFeint. This app is available for the iPhone, iPod touch, and iPad, and is released by Big Mouse Media for $0.99 (8/19/10).

Let me just establish this game. 3 rows of moving plates carry plates of 4 different foods. You have 4 sauces on the corners of the screen and you have to match one sauce with another. The food looks pretty good actually. The graphics are a cartoony, almost purely flash style vector art. There is a really nice silliness to this style of graphics, and I think it plays well with the theme of adding sauce to food. 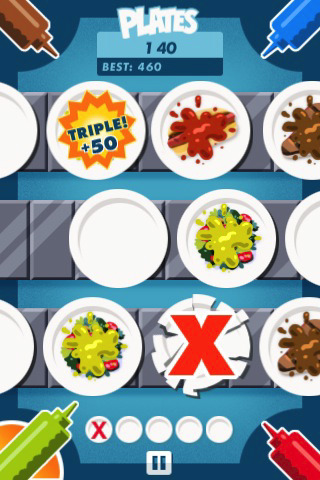 The sauces work like this: Yellow sauce goes on salad, red sauce goes on hotdog, blue sauce goes on blueberry pancake, and brown sauce goes on steak. Most of it makes sense, yellow being the salad dressing, red is ketchup, blue would probably be blueberry syrup, and brown would be steak sauce. Logically, it would make sense on paper. In game however, it just starts off with a rather confusing adjustment. You don’t naturally memorize tutorials. No one should.

Instead, it shows you the color combination and one press later, you are in game trying to remember what goes with what. It takes a couple of tries and a couple of loses in order to get it right. It’s a big adjustment and I sort of wished that they would label the bottles or make them all have those classic brand looks, like having the ketchup bottle actually look like a ketchup bottle or maybe a salad dressing bottle or something. For certain colorblind people, the only way to play this game properly is to memorize what position the bottles are at and match them to the plates. Luckily, there is no time limit, though I do notice that there are some random exploding plates that I just don’t expect or understand.

Plates is a simple game with a single note. You have to adjust your brain to play this and once it’s done, it becomes a much easier game to play. I would say that there really should be a free version of this game.

Here is a video demo of the Plates! app on the iPhone