geoDefense Swarm is the brother/sister of GeoDefense. Like the original, you have particle explosions of amazing lights and colors and absolutely absorbing gameplay, but this time, you have to form your own grids. Now, in addition to finding the right units to make, you also have to create a complex path for your enemies to travel down, creating a totally different strategy-tower-defense game. Also released by Critical Thought Games, GeoDefense Swarm costs $1.99 and is available for the iPhone, iPod touch, and iPad.

Remember the rainbow of particle explosions, space distortion, and straight-path extravaganza of GeoDefense? This game adds some whole new features to that formula. 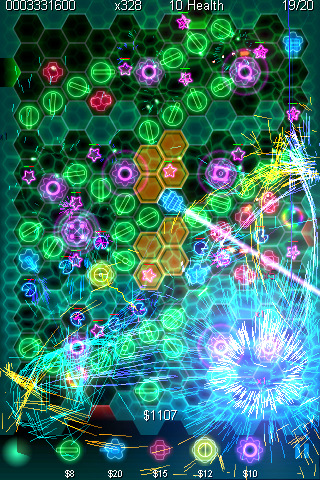 There are much larger particle effects this time around, with huge bursts of colors and the new hexagonal grid has even more of a distortion to it. It’s hard to explain, but they basically overlay a separate, smaller hex-grid and distort that. It looks very much like a honey-comb and really takes advantage of entire screen.

Swarm is not the same path-based tower defense game that GeoDefense was. This is a much more difficult version where you make your own map. Creating a twisting, zigzagging path is the best way to go as it forces your opponent to make laps around dozens of your cannons, laser beams, missiles, and other units. Beams now come as even more handy as they can easily sweep across the entire screen deal damage to any enemy unit that gets caught in it.

The sounds are basically the same, with the lady who counts you down. It was extremely effective in the first game when you are neck-deep in enemies crawling on the screen and they are steadily advancing through your defenses. 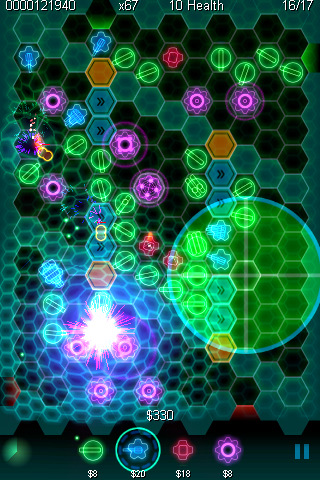 If I had any requests for future revisions of this game, it would be a to have full open map with all units available for free-play. Kind of like an endless sandbox version of a level that allows me to create massively upgraded towers to see how long I can survive for.

geoDefense Swarm is not an easy game, so the difficulty jump from GeoDefense might come off as daunting for those of you who never had much exposure to open-field tower defense games, but those of you who know how to play these or those of you who just want to try it out, this is a great place to start and a personal favorite in my iPhone.