I’ve actually never had to make egg drop soup (but I do love it so), and I don’t how many farmers that do, but as a clever title it works pretty. If you’ve ever played a pachinko machine–or a pinball machine, for those of you not in Japan–replace the little metal balls with a virtual egg, and you get Brian White’s tricksy little game app, Egg Drop Soup. And of course, most of the obstacles are farm-related in some way. The playing field is set up with an egg-laying hen at the top of the screen and a grandmotherly farmer holding a soup pot at the bottom of the screen. Between them stands an obstacle course of bees, stars, bubbles, butterflies, and more. 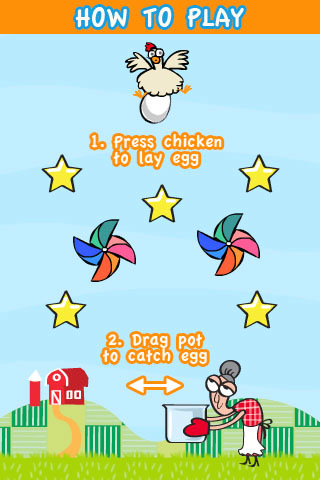 Obviously, the objective is to get the egg from the hen into the soup pot without breaking it. Each egg in the pot is 100 points; you need 500 points to win and go on to the next level, although other objects in the field may garner extra points as well. Tap the hen to have her lay an egg, and tilt the device left or right to try to steer the egg. Some obstacles can actually help you, but a lot of them can break the eggs, which causes the granny to lament in a worrisome tone (so do your best not to break ’em). Drag the farmer at the bottom with your finger to help her catch the egg. You begin each of the 25 levels with five lives, as indicated by the row of eggs on the top left. Interestingly, although Egg Drop Soup locks down all the levels except the ones you’re playing or have won as a default, you can manually unlock all the levels by tapping the lock icon when choosing a level to play.

Egg Drop Soup is a game that can be enjoyed by large range of ages. Younger kids would love the bright, cartoony graphics, while older kids would appreciate the increasingly difficult gameplay. Although the motions are repetitive, the game keeps itself fresh by adding different obstacles in different combinations. What makes it even more difficult, however, is the fact that the left-and-right steering of the egg while it is in motion doesn’t really work–it’s like trying to control it going through a thick mass of molasses. Whether this is intentional on the developer’s part, I have no idea, but it gets rather frustrating. And while I can appreciate the manual unlock after a hard level, allowing free access to levels is probably less of an incentive to finish up all the levels. Egg Drop Soup doesn’t have a ton of polish and glitz, but it can be a fun little distraction to play with every now and then.