GunRange is a first-person target practice iPhone game where you shoot wood targets with a variety of guns in different target-shooting challenges. It’s a rare sight to see shooter games not concentrate on mass murder. This game concentrates on getting to the murder. Brought to you by ngmoco, Inc for $0.99 on the iPhone, iPod touch, and iPad, GunRange is one of the first games I’ve seen that is based solely on target practice that most games skim over in the very beginning such as the Call of Duty series. 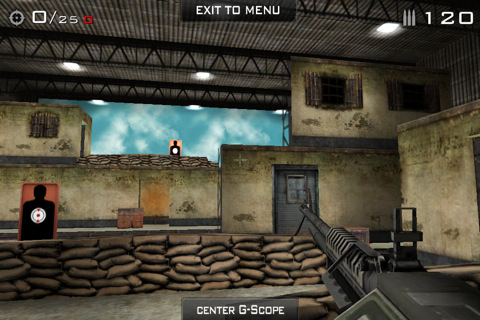 I appreciate the theme of this app. Big targets are tracked into the field with big white/red circles on their bodies and you use a variety of big guns to shoot them down. Controls work well for aiming and shooting. You aim with your finger, dragging on the screen to move the aiming reticle and you have a button to press with your other finger to fire the gun. There is a reload button that you can press, but otherwise, that’s pretty much it for controlling the weapon.

There is a large storage of guns to select from, each with their own levels and challenges to play, though almost all the levels are the same as the others. Each environment looks pretty good, with many military style training zones. The props are pretty good though incredibly repetitive with the same brick patterns and reused sandbag textures. Overall, however, they really mess well together and make a relatively realistic feel to the game.

Your enemies won’t be demon Nazis or cyborgs from the future in this game. Wooden targets pop up and move around all over the stage for you to shoot. Some are more durable than others and on later stages, require a bit more fire before they count as killed. The sounds of the guns could very well be highly accurate, but I wouldn’t know since I never studied the nuances of calibers and mechanisms for firearms, but they sound good and strong. 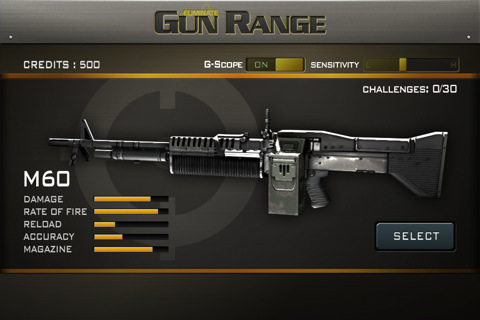 There are a nice variety of 12 well-done guns with realistic 3D models and preview images. There has been some controversy over the new weapons pack, which is basically 2 guns to unlock that cost $0.99 for both. The latest update to 1.3 only brought those two guns and a reload button, so users in the AppStore really took offense to that. Now, the game doesn’t force you to buy those items so you shouldn’t take the one-star ratings as something important about the game… just price issues.

Overall, Eliminate: GunRange is a different take on FPS apps. If you like realism, this will be a good one for you. You don’t walk around a base and kill things, so don’t expect an action-packed explosion feast. You can burn a couple of minutes while you complete the individual challenges to gather points that will allow you to unlock more guns for more challenges. It could use more level variety and more free guns to unlock, but overall, Eliminate: GunRange is a great take on the FPS genre. Try it out for a more relaxed, less violent shooting simulation.

Here is a video demo of the Eliminate: GunRange app on the iPhone