Grab your shotguns, lawnmower blade launchers and mayonnaise bombs, man the farmhouse and blast those interstellar freaky alien genotypes! Redneck Vs Aliens is the ultimate battle against creepy green aliens that march right onto your property! You can join the fight against the alien invasion by using your iPhone, iPod touch, and iPad for the low-low-patriotic price of $0.99 or the Lite alternative. This app was created by Dennis Zdonov.

Rednecks Vs Aliens is a base-defense game where you tap on aliens to shoot at aliens. You have access to different real-world weapons like the 12-Gauge, AK-47, and .50 Caliber sniper rifles, or the far better Lawnmower Blade Launcher and Flaming Tennis ball Racquet. You also have access to bombs, a raging bull (non-Robert De Niro), and a twister for purchase. Yes, that’s right, you can buy a tornado. 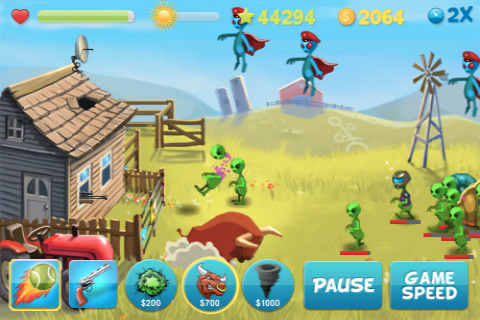 The art in Rednecks Vs Aliens is absolutely wonderful, with a softer, almost pastel look to the scenery. Each weapon or attack is very well drawn with pretty good animations. The aliens have fun appearances. I especially love the flying M.Bison alien that floats above the battle field on their way to world domination. OF COURSE!

Each weapon have a different use, though I find the Lawnmower to be the most useful since it will kill most aliens extremely quickly. Of the powerups, my least favorite is the tennis ball, which will hit multiple enemies, but requires way too many firings to kill a single alien. Not a great one. The controls also hinder the gameplay a bit since my big giant finger covers all the aliens when I am firing. Half the time, all I’m looking at is an empty field of grass (though it is very pretty and well-drawn). Later levels alleviate this issue when the enemies become a heck of a lot faster, more cleaver, and start sporting shields. 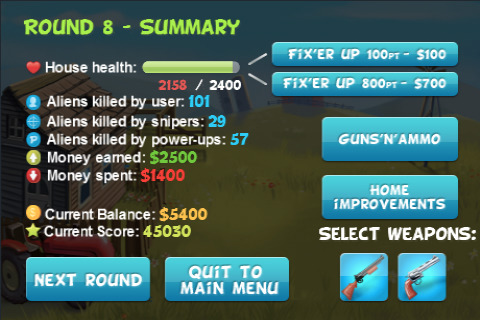 You can also improve your home through lovely powerups such as snipers, instant healing, electric fences, and other ways of keeping those little green aliens from entering your home.

Rednecks Vs Aliens is a fun game that makes aliens feel a lot like zombies. The different units look fun and actually pretty entertaining and the weapons really do feel different and most of the time, they are worth the in-game costs. This was an interesting defender game and I’d be extremely happy if they released different Redneck Vs themes. Zombies, Nazis, cyborgs, mummies, werewolves, the possibilities are endless! So prepare for the alien invasion. And of course, remember: Please think of the rednecks. Buy a .50 caliber sniper rifle and destroy those UFOs.