Take one part Geometry Wars, one part Space Invaders, and one part Galaga and you’ll come up with one of the best looking games I’ve run across for the iPhone. You play as Earth. Yes, Earth. You touch the screen to explode where you touch and kill invading ships, giant dragon things, and evil crab looking things. Defend your shielded Earth and collect a variety of powerups to take these aliens on. Released by FISHLABS, Earth Defender is available on the iPhone, iPod touch, and iPad for $0.99.

Touch the screen to use your bombs, lighting bolt generators, blackholes, and other explosives. Don’t let any enemies break all your shields and leave you vulnerable or else the enemies will send a huge swarm of death at you. That’s the game and it—is—AWESOME. 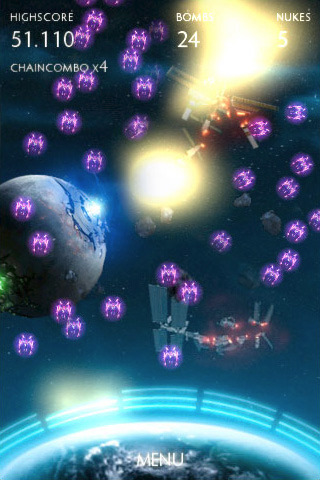 The graphics are great. Glowing ships are easy to see against the very nicely done background of what looks like Cybertron mixed with the moon. Reds and blues are the main colors and man, the red enemies look amazingly detailed and well done. There is an image in the App store of a giant crab-like UFO. That is just the beginning of how amazing these enemies look. It’s like something you’d see on the PS3 or 360. It’s gorgeous.

The music and sounds are epic and intense with some nicely done menu music too. It sets the mood and gives the game a sense of epicness. There is actually a story for the game where you develop strength through powerups to defeat stronger and stronger enemies, including the beginning where they really build up a red worm/dragon alien battle as something that you have to gain strength to defeat. It’s a great build up and made the first couple of boss battles really memorable.

This game can get really exciting and extremely entertaining. There have been some issues though that occur when I save the game. Sometimes I’ll come back after reaching many levels in only to find that the ‘Resume game’ option is no longer available to me. I have to replay the game from the start and that really does suck, but the game is extremely entertaining… I’ve replayed the game from the start twice now. Got to the level where they send in the double dragons… no relation.

This is an outstanding game in terms of graphics and gameplay. The save system needs work, but outside of that, it’s an great fun and eye candy. Maybe with another update and this would be the app to get. Check out Earth Defender for yourself if you are a fan of defense games with Space invaders and Galaga style gameplay.