Monkeys can fly! The Wizard of Oz nightmares could actually happen!!! Oh wait, nevermind, these guys are fun loving little monkeys that fly around collecting cloud puffs, bouncing on trampolines to extend their flight time. Released by A Little BC, MiniMonos Flight is available on the iPhone, iPod touch, and iPad for $1.99.

You push a single button and tilt the iPhone to control your monkey flyer. You press this little Up button to make your monkey flap his leaf wings. You have to steer your monkey through tilting your iDevice. You basically have to control how much energy your monkey has. The longer you hold the arrow, the more energy you spend. Whenever you hit a floating white cloud, you gain more energy. Each time you hit a storm cloud, you lose a chunk of your energy. The goal is to go as far as possible, collect as many clouds as possible, and stay as high up in the sky as possible. If you fall, you can sometimes land on a trampoline to gain some momentum back and try to recover back into the sky though careful control over your flapping and through collecting more clouds. 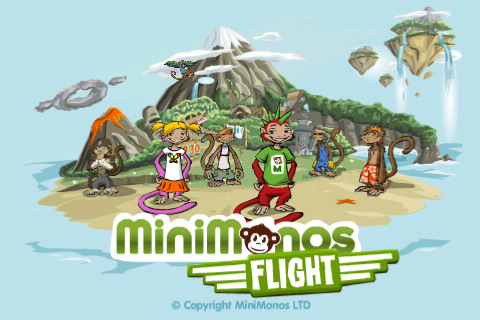 There isn’t a lot to this app right now. No powerups to give you boosted flights, speed enhancements, change the clouds or anything like that. There isn’t a character selection screen or customizing through the app itself, but that’s not the point of this game now is it?

If you actually visit the MiniMonos site, you’ll find that this is actually a single minigame from the flash-based website. They have a community online where you can also play this style of game but the website makes it far easier. The reason? This game is too zoomed in. It’s the platformer flaw that cause endless deaths because you can’t see where you are jumping or falling into. In the website version, the camera is zoomed way out and you can see more of where you are going.

The art is decent. The backgrounds and the monkeys all look just like from the flash site and the interface is clean. The sounds could use some work since it’s just a repeating loop of birds chirping. It’s alright but can get grating.

You won’t be hitting any obstacles or challenges besides just flying. Even the points you get for collecting clouds, reaching heights, or travelling long distances are not rewarded and you unlock nothing through this game. No, instead, you collect Banana chips. These chips can be spent in the website after you submit the score to the membership of the MiniMonos site. Want to know the downside? You have to pay to have a Gold account in order to buy hair, shirts, pants, or customizable things for the site, the changes into this app are just the physical appearance of your monkey.

This is a game that is just one small minigame in the world of MiniMonos that isn’t well expanded on, costs $1.99 (which isn’t credited into your Gold membership costs, nor does it reward you with Banana Chips that you can’t use for buying this app.) It feels like there isn’t any point in this app at all except for the main site’s banana collection. 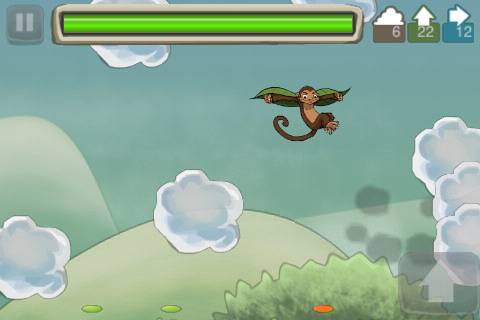 The proceeds apparently go to providing clean water for children in India. For every membership, a child gets clean water for a day, a week, or two weeks. Signing up for the full year gives a child two weeks worth of water? The website makes it difficult to find out the prices for membership and the app tells you nothing about the cause. The AppStore needs to tell you these things. I had to hunt this information down through their website and join the game via a free account just to find out how much it costs to become a gold member. After going through so much, it’s $5.95 for 1 month, $29.95 ($4.99 per month) for 6 months, and $49.95 ($4.16 per month) for a year’s Gold membership.

Sign up to help those children, or better yet, just find out a way to donate your money directly. Also support the site so they can make their website more informational, give this app more incentive to be payed for and played with when there is a free version online, and give me the ability to see the prices right away rather than having to make a free account, go into the game world, THEN access the sign up site. Good effort guys, but maybe a compilation of your website’s minigames into one app would make this app really fun. Include a member’s chat area or some kind of multiplayer leaderboard system and you got yourself a solid game.