You walk slowly down the street and you spot a giant Mecha Godzilla. What do you do? Go and kick it’s butt!!! What do you get when you combine Speed Racer, Batman (Adam West style), a couple episodes of Power Rangers and Gundam, and then throw in some Gigantor (aka Tetsujin 28-go) references? You get this crazy super-amazing-giant-robot-punching simulator game app for the iPhone, iPod touch, and iPad. Created by Prodigy Co., Ltd, you get this app for $0.99 or try it out in its Lite version.

Oh man… You play as a young motorcycle-helmeted young man with an iPhone remote control who talks with a hot chick that is strangely attracted to your pre-pubescent self. Ultimate fanboy fantasy? To control your mech, you use the iPhone by touching two punch buttons and tilting the phone left and right to move its legs. Each time you battle a monster, you can block attacks by pressing both the left and right punch buttons at the same time or perform a super attack known as the ‘X-Attack’ where you draw an X in the center of the screen. Each time you win, you get a poker card with a sexy lady on it. Ultimate fanboy fantasy? Yes. Yes it is. 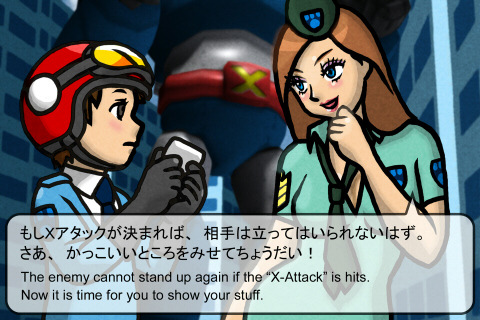 Let’s start off with the very bold drawings. The characters have a super-thick outline, the colors are solid with glossy effects applied to them, and all the women are hot… in an anime kind of way. The 3D is a mixed bag since the buildings are boring but the robots are really well done. Each time you beat your enemy, the screen gives you a feast of “AWESOME”, “CONGRATULATIONS”, and “WOW”s that really gives you that pat on the back. Much of this game is half-Japanese. You’ll see the Japanese text over the English text, but luckily it’s all easily legible and the hilariously cheesy dialog works well with the tone of the game. The music is really nice and strangely bombastic in a military, anime style. It feels like I’m watching a 50s anime. 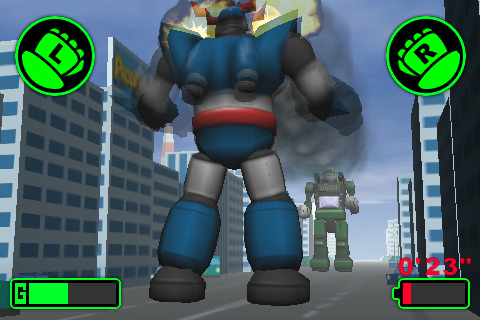 There is a lot that I wished for during gameplay however. There are two attack buttons and a special move command. Why is there two attack buttons when both attacks deal the same damage, cause the same effects on your opponent, and don’t play any real role in combat strategy? Can’t it be a punch and kick button instead? Why do I have to walk to the battle by tilting the phone? I know that the anime probably has this type of segment, but in a game, I don’t feel the ‘awesome’ factor of controlling my robot, it just slows the combat down. Enemies with long range attacks get cheap shots in while you slowly advance and you’ll end up just wanting to punch the enemy right away.

The blocking is also sketchy at best. There is a very noticeable delay between each of your actions so it always feels like the robot is lagging behind your controls, so when trying to block, since it requires two fingers on the buttons at the same time, you will accidentally punch when you mean to block and it will get you beaten down on later enemies. Why couldn’t there just be a guard button instead? Maybe a low block and high block to make the kick thing more useful?

There is also a glitch in the game where if you leave the app to answer the phone, text someone, or just put the phone away, when you come back and try to use the app again, it will crash at startup. It will crash a lot and just return you to your main menu for 2, sometimes 4 times in my case. The game will start up again eventually, but it’s an odd glitch.

The controls are sluggish but the design is great. The cutscenes are entertaining and well drawn, the 3D for the enemies are quite nostalgic and the concept itself is great. What they could have done is a Fight Night style fighting game where you use giant robots instead of boxers. How awesome would that have been? The game feels like that is what it wanted to be, but in the end, the controls are far too unresponsive to allow me to really get behind this game. It’s still a version 1.0 however, so give it a chance, try it out.