Oh man, this is a throwback to the Super Mario Bros, Kirby, and Yoshi’s Island. Frogatto is a 2D platformer where you have to eat and spit-back attack from the Yoshi’s Island to Kirby games and explore the world while progressing it’s story. Frogatto is released by Lost Pixel on the iPhone, iPod touch, and iPad for $2.99.

I’m happy to start the review by stating that the pixel art in this game are absolutely awesome. I am dumbfounded by how amazingly detailed everything is. The outside of your character’s house alone is worth taking a picture of. Enemy designs are pretty good, the environments are rich with detail, and the characters are really entertainingly quirky. SNES graphics have never looked this good. 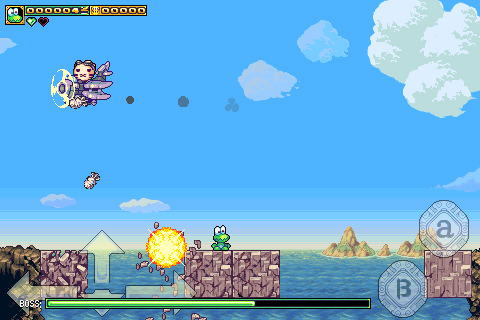 ALL iPhone dev teams should consider 2D art instead of 3D for this reason alone: 2D allows for better, clearer, crisper, and higher ‘resolution’ then 3D while maintaining good frame rates and memory. Unless having a third dimension is absolutely essential to the game, you’ll have a better look and feel in 2D for the iPhone/iPod generation. Now, the 4G and iPad however, is where you can take the 3D and run with it.

The game is controlled by an onscreen D-pad, two action buttons, and hidden action buttons that pop up when needed. Jumping and running can be tricky when fighting enemies, mostly due to the short range of your tongue attack. Our little frog here has barely half his width of attack range, which basically makes it a close call each time you want to eat an enemy. The jump and fire buttons are reversed from the classic Mario design where the jump button is always on the right and the fire button is always on the left. It’s a twitch reflex for me as I always move my thumb away from the screen to jump. I’d like to see an option to reverse this.

You also have an underwater control scheme that pops up whenever you land in water and that basically changes the controls to a joypad version. Why can’t I use that control scheme for the rest of the game? I like that one a lot better. 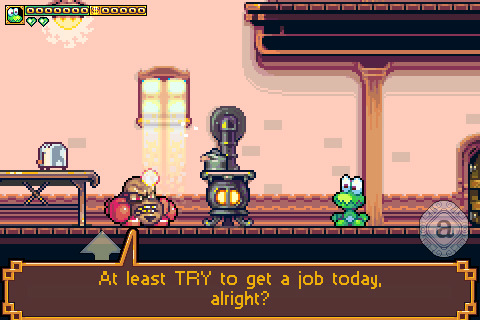 The story is simple and doesn’t take itself seriously. The characters speak intelligently and aren’t annoying or a chore to read through. I won’t spoil the plot for you readers out there since it’s actually quite good. With version 1.0.1 fixing many bugs and improving controls, the game’s story and improved playability really increased my enjoyment of this game.

With further updates; increased attack range, alternative control scheme options, better controller graphics so that the down button isn’t so cramped into the left and right ones, and maybe a better system for save points. I would like to save at any time since this game isn’t a hardcore RPG nor is it a time-based game, so saving anywhere would be a great feature rather than a flow changer. Also, allow us to skip dialog boxes. I’ve died on some bosses quite a bit and re-re-re-reading the same text can drive a man froggy.

I would recommend this game solely to just look at the incredibly gorgeous sprite drawings. The story is solid, art is solid, the sound is solid, the character is cute, and the only watery substance is still the controls, but it’s on its way to being solid through iteration temperature drops… sorry, bad metaphor. Just get this game.