I love having options. I love having the freedom to pick what I want, when I want it, and if I can specify the teeny tiny details, even better, so it should come as no surprise that I love Choice of Games, developers of the previously reviewed Choice of Dragon. Their commitment to bringing text adventures back into the limelight is worthy of praise. More than just a fresh trip down a maze of twisty passages, these are fresh and original interactive fictions.

Choice of Romance is one such new and exciting offering to the slender but growing world of text adventures in the App Store. While Choice of Romance isn’t quite high literature, it’s definitely meatier and more satisfying than you might expect, with complicated political intrigues and explosive magical action, in addition to the expected romance lurking at every corner. 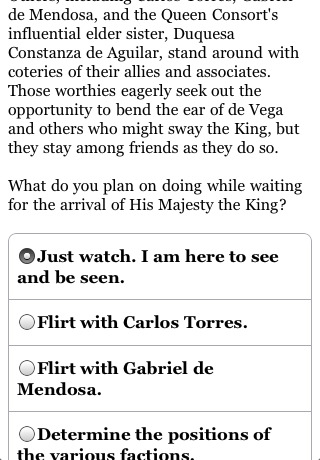 Choice of Romance is set in a fictional world of monarchy and magic with a distinct Spanish flair. You play as a young noble visiting court for the first time in the hopes of securing a suitable match. Regardless of your initial character choices, eventually three different suitors will emerge, a passionate, but penniless young noble, a fabulously wealthy but very bland middle-aged merchant, and the powerful and alluring, but very married monarch.

In essence, it’s a novel with a twist. At various junctures during the story, you have certain choices to make which may change the narrative in some way. Some of these may be as trivial as selecting your character’s hair color, but others can have a major impact on your future, and collectively they determine the ultimate outcome of your character.

At the beginning, you can select your gender, name, appearance, what gender you’re interested in, and several other details that dictate your initial character stats, just like in an RPG. Depending on how charming or intelligent you are, some actions you attempt may succeed or fail, all of which have repercussions down the line. As you play through, you’ll start to notice how different paths affect your stats and change the endings, and there are multiple endings, some very, very different than others.

Although I was initially concerned it would turn out to be soppy fluff, Choice of Romance is actually a wonderfully fascinating and addictive experience that will leave you playing it over and over again as you attempt to discover each new ending. This is definitely far more than a schlocky bodice-ripper with Fabio on the cover. If you’re interested in experiencing well-written and immersive stories, then definitely check out Choice of Romance and all the other Choice of Games offerings.