Created by Red Dot Inc, Rabbit Run PRO is a sidescroller game where you play as a superhero bunny that fires carrots at dogs, eagles, and farmers… I have no idea what I just said, but it sure is interesting isn’t it!? Rabbit Run PRO is available on the iPhone, iPod touch, and iPad for $0.99. Do not confuse this app with Rabbit Run and Rabbit Run Lite; Rabbit Run PRO has a cartoony super-bunny while Rabbit Run has a realistic bunny image and does not have a lite or free version.

To play the game, you hold your finger on the left side of the screen to lift off the ground and if you take your finger off the screen, the rabbit will fly really close to the ground. You basically act as the rabbits wind lift. You must avoid the enemies on screen by weaving between them and then tapping the right side of the screen to fire your carrot gun at the enemy. There are two game modes in Rabbit Run PRO: The first being an evasion game where you have to avoid all the enemies and defeat bosses with a very limited amount of carrots. You can potentially make your way through this game mode without firing once, but it’s very difficult. Next is a mode where you must kill all the enemies without letting a single one reach the left side of the screen. You have unlimited carrots and with each use, you spend your total high score points. The more wasteful your shots are, the lower your score will be. 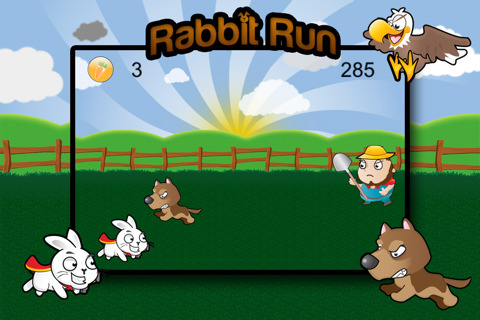 Graphics for Rabbit Run PRO is very well done. I enjoyed the look of the main character, a flying rabbit with a carrot shooter gun and all the enemies and boss characters are very well done. The background sky looks really quite good with the shining sun stripes, colorful gradients and a lovely repeating fence. The grass however, is a dark green that has no details or anything interesting to it. Maybe just a couple of flowers, odd weeds, or patches of dead grass or dirt could make the overall look more detailed.

I liked the control scheme as it reacted pretty well to my actions and the shooting works well, even under pressure, but sometimes, it can be too sensitive and the Rabbit will be too difficult to control while trying to squeeze between an eagle, a boss’s projectile, and trying to gather the carrot powerup to restock your ammo in order to shoot the boss. It’s frantic and difficult. 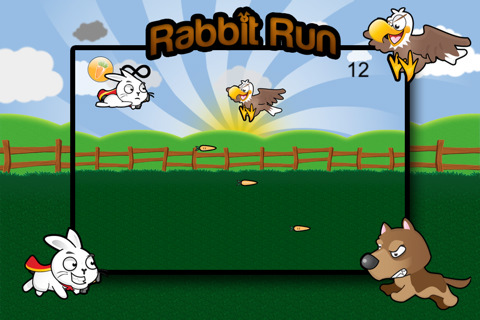 The musical score and sound effects are odd. I’ll quote my girlfriend on this one: “It sounds so whimsical. *an eagle gets shot by a carrot and screams* … Ok, now it isn’t as whimsical, I think something just died.” It’s a jarring shift when a guy comes on screen screaming “Get off my land!” (I was flying by the way) during this whimsical, silly cartoon soundtrack playing in the background. Overall though, it was memorable and if it weren’t for the brutal assault against dogs, birds, and farmers with sharp carrots the music would have fit the theme really well.

I thoroughly enjoyed Rabbit Run PRO because of it’s simple gameplay style and addictive full-assault mode where you fly around killing enemies instead of just dodging them. I want to see more enemies though, different variations on the dogs and bird types, maybe a family of farmers or something. How about different ammo types like cabbages or rabbit food pellets? I liked this concept and the art, so if anything, this is another one of those extremely well executed games that could suck away hours of your life without you noticing it. Fly bunny, fly!