Cannon Swinger is an iPhone game developed by Youngil HI-TECH Inc that costs $0.99. It is compatible with an iPhone, iPod Touch, and iPad. According to the developer, this app was inspired by the movie “Wanted,” in that it incorporates the idea of being able to bend bullets. The quote taken directly from the developer’s page is, “If no one told you that bullets flew straight and I gave you and told you to hit the target!” followed by, -movie quotes, and this speaks for itself. 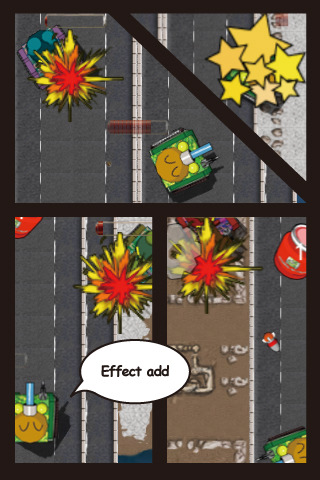 The game is tank against tanks. The pint-sized tofu shaped creature in the driver’s seat of the tank you are driving is hardly Angelina Jolie. It is up to you to power forward and steer the tank while shooting missiles vigorously to defeat oncoming enemies. To steer you can use your finger to touch designated areas of the screen and to shoot you can do the same, but once you start firing you can tilt your device from side to side in order to bend the missile toward the target. You get a bird’s eye view of the tanks as they plow through highways. As you gain levels the range of your cannon increases, allowing you to get the drop on your enemies. A careful player will use a longer-range cannon to sneak up on enemies that may not be presented on the screen yet, and take them off the board before they are even able to return fire. You can also steal enemy gold, which you can use towards restorations. Every enemy you kill renders some sort of health pack, which you may use at your discretion while you are in play to recover a part of your hit points. This is critical because the tank’s maneuverability is relatively low and it is very difficult to enter into a firefight with another tank without sustaining considerable damage to your tank.

In closing, the game offers very little in variation from level to level and the awkward controls take a bit of practice to get used to. If you pick this game up, and are not hooked within two minutes, don’t expect much else from your experience with it.

Here is a video demo of the C.Swinger app on the iPhone