Build-a-Lot 2: City of the Year review

City planning and development doesn’t usually scream “FUN!”, but that’s where the Build-a-Lot series can really surprise you. Think of it as Sim City writ small, with more than a hint of Diner Dash-esque frenzy involved. Instead of trying to cram a huge sprawling metropolis onto the tiny iPhone screen, the Build-a-Lot games focus on neighborhoods and only give you a dozen properties or so to manage, but you are the master of your little domain.

From the very start, you are pretty much running the show. There’s a comprehensive tutorial to ease you into it, but in a very short amount of time, you are responsible for building, painting, landscaping, and upgrading houses. You also oversee the installation of public buildings, like parks and recycling centers, all while trying to meet the bullet-pointed and highly specific needs of the city. If they need 2 new parks, 4 yellow bungalows, and a coffeehouse nearby, you’re on it, because you are super contractor/urban development guy! 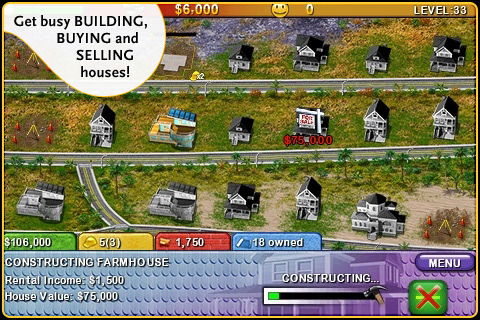 Like any building project, you have deadlines to meet. Once the construction crews go zipping around, the action seems pretty crazy, but it all becomes second nature after awhile and a lot of fun. I had played the original PC game in the past, so I knew what to expect, but I was actually really pleased by how smoothly the touch interface worked. I never missed a beat, and while the game was definitely challenging, it was never because of technology issues.

The one aspect of this otherwise beautifully managed port that has suffered is the graphics. They’re not awful, but the tiny screen does them no favors, and the game is lacking in overall visual appeal. Everything looks slightly fuzzy and cramped, which is a shame considering how delightful the game is to play.

In the world of casual sims, Build-a-Lot games stand out as leaders of the pack by delivering a very solid and easy to grasp play mechanism, but also gradually introducing new aspects to keep levels fun and progress challenging. As you play through, it never feels like the same old thing, because it isn’t. The goals are always different, and the means of achieving them also change over time as you open up new structures to build. 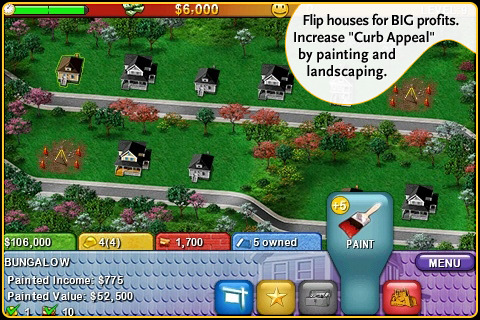 Don’t let the fact that Build-a-Lot 2: Game of the Year doesn’t really look like much, because it’s an absolute blast to play, whether you’re a fan of Diner Dash or Sim City.