Ever since 1990 on the Genesis, Phantasy Star II has been firmly lodged into gamer’s nostalgia as one of the greatest RPGs of all time. The deep and memorable plot, an incredible cast, and the game structure that remains in many RPGs that came after it, there is a reason that Phantasy Star II was so well received. Sega finally releases Phantasy Star II for the mobile device, but does it make the transition? Do the nostalgia glasses still apply well? Available on the iPhone, iPod touch, and iPad for $4.99, Phantasy Star II is, of course, released by Sega.

One of the biggest issues with nostalgic games is that the blinders are very effective. Most fans ignore any and all flaws because of their love of a game during their childhood. I, however, grew up with Final Fantasy and my nostalgia glasses have been shattered long ago. This is a real look at Phantasy Star II with no previous association. 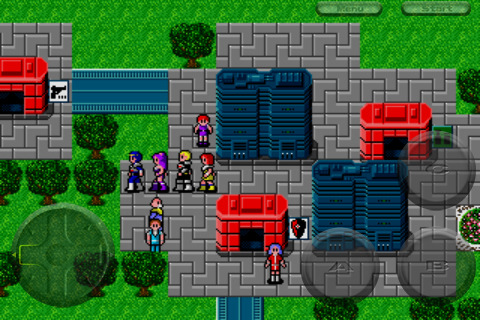 The graphics for the game are honestly quite amazing for a Genesis game. Environments are packed with details despite having the old square-grid system, well done character designs, creative and have a huge amount of variation, and the story is dramatic. No seriously… I spent weeks playing this game to the end and I can tell you with confidence that Final Fantasy 7 most likely got inspiration from here. Sounds and music are actually surprisingly memorable and epic like any Nobuo Uematsu score.

The combat is based on the random encounter system that, in today’s age is horribly outdated, at the time was standard, mostly due to limitations of the hardware. It is, however improved by the customization of your characters. Your characters have a slew of options available like chest armor, helmts, etc… and two hands. I know this seems like a minor thing to mention, but having the ability to equip them with two weapons at the start of the game is rare in the RPG world. Two weapons mean a double attack, which in the early sections is unbelievably useful.

There are some issues with this game though, despite the amazing production. Controls are strangely cumbersome. They appear as slightly transparent buttons at the bottom of the screen. Dialog is blocked by these giant buttons and you cannot change their opacity levels, move them, or shrink them. Instead, you have two viewing modes: Zoomed in or boxed off. Zoomed in, the graphics suddenly become very fuzzy and a pain and the dialog boxes get interfered by the controls. Boxed off places a giant blue frame around a small screen. The controls now rest inside the frame and the game plays at normal resolution inside the box, making for a much better viewing experience, but it takes some time to get used to.

One of the biggest issues I had was with the fact that this is an iPhone port of a Genesis game. Saving is a pain in the butt. You cannot play this game if you have a short time to burn. This is an investment of your attention because you can only save (and the game will only save) when you go into town and save there. If you die, you start off where you last saved. If you get a phone call, if you start another app, if your batteries die, you better hope you aren’t in the world map, a dungeon, or just too far away from a save area.

Combat is brutal, and by that, I mean that nothing is explained and the enemy attacks way more often than you do for much of the first levels. The spells and magic attacks have their names displayed, but provide no descriptions of their effects. They don’t give you clear instructions on how or where to go, so wandering into high level zones is frustrating since when you die, if you have a survivor, you must quickly run back to town to the cloning factory and ‘clone’-revive your character/s that died. If all your party gets wiped, you start over from your save point. This makes the very long, very difficult dungeons a source of nightmares and horror. 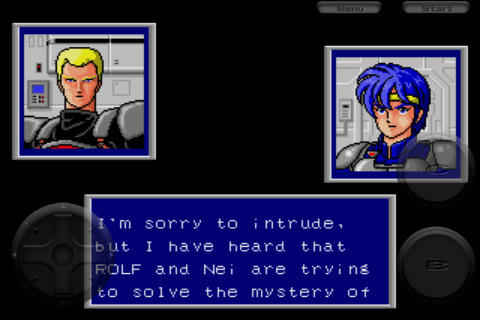 The enemies seem to always get priority of attacks during combat. You press the ‘fight’ command and suddenly one of your characters gets pelted by 3 attacks, you attack once, press fight again, get pelted by 3 more. This is one of the hardest early low-level experiences I’ve ever had and I’ve played many of the Dragon Quest games which had this same problem.

Without some kind of modification like saving anywhere (maybe at a penalty of an item or just costing some cash), without some improvements on layout of the UI, without the original strategy guide that was provided to the people who purchased Phantasy Star II in 1990 (because Sega knew that we NEEDED that guide to play the game), we are left with a very frustrating, but oddly fulfilling game. It’s probably fulfilling because by the time you hit the end and watch the amazing story unfold, you knew how hard it was to get there.

Phantasy Star II is a game that requires the strategy guide. Without it, it’s one of the hardest games to overcome… trust me… However, for this review, I have to take into account that the graphics, music, customizability of characters, the characters themselves, the epic storyline, the fact that this is a really good port from Sega, and the fact that anyone who loved the game in the past has already ignored everything I’ve said and purchased it already, I would say get this game. It’s legendary… but for the iPhone, it’s flawed.