When my boyfriend’s father asked me for an interesting game to play on his new iPhone, I introduced him to Boomshine, and he took to it like a duck to water. He’s a fairly tech-savvy guy, but he’s not a gamer, and for ages now, Boomshine has been his standard 5-minute fix. It’s about as basic a game as you can get, but he loves it. But the next time he asks me for a new game to play, I’m pointing him straight at Splode.

Splode is effectively the younger and prettier version of Boomshine. Like a hot, trophy wife, it’s not quite as comfortable as the old version, but it fulfills the same role and is way prettier to look at. A simple chain-reaction game that is as lovely as it is uncomplicated, Splode is an absolutely fantastic game for non-gamers. It’s trivially easy to learn, very pretty, and it doesn’t take up hardly any time at all. 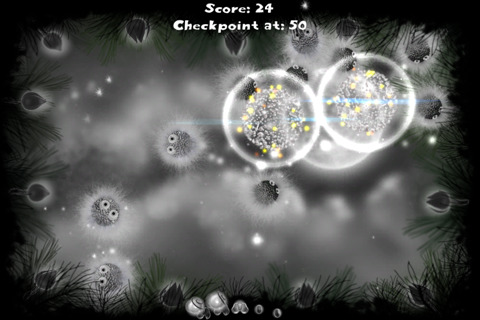 Floating around the screen are dozens of fuzzy grey motes called Splodes, and to play, you just touch one. That will cause the Splode to puff up and gently explode. If any other Splodes are within the blast radius, they too will puff up and explode, either until all the Splodes are gone or they drift too far away to affect any. Simple as that.

Every Splode explodes in a soft burst of color and music, and the background gradually changes from a dull monochrome to vivid color the more Splodes you get, so the overall effect is stunning. 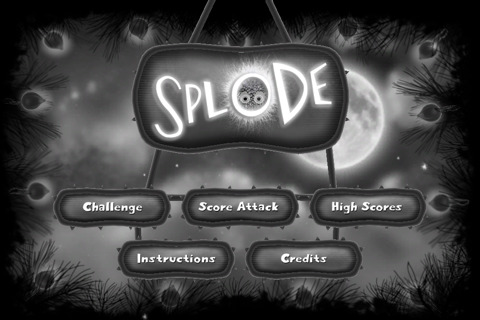 There are two modes to play in: Challenge and Score Attack. Challenge gives you a single touch to try to explode a certain number of Splodes on one screen, while Score Attack is a never-ending mode that gives you 5 touches to explode a certain number, with new Splodes refilling the screen after every touch. They’re essentially the same game with slightly different scoring mechanisms, but Score Attack allows you to earn high scores to compare on an OpenFeint leaderboard. The Open Feint features beyond that are basically nonexistent, but Splode is far more of a Zen-like, relaxation game than it is a competitive one.

That said, Challenge mode can feel like a bit like a bad game of golf sometimes; yes, the atmosphere is very pretty and soothing, but you just need one more Splode to be done with the stupid level and you’ve already replayed it a dozen times and BLADLJAGFJKAGOLKJASOPI!!! You get the picture, but that should tell you something about how good Splode is at getting you hooked.

I don’t like the physics engine as much as Boomshine’s, but I’d be a fool to not appreciate and admire how much Splode brings to the genre. The more serious complaint is that the game is very repetitive and doesn’t provide much by way of goals. Every level is essentially the same, just with a different number of Splodes to burst, so it’s VERY easy to get bored or frustrated with the slow, unchanging pace if you try to play for longer than five minutes at a time. At $1.99, the price is probably a little high for the extremely simple gameplay you’re getting, but this is still perfect for non-gamers looking for a quick diversion, and it’s kid-friendly. If you’re more interested in a simple and very pretty mental diversion to help you unwind in 20 second stretches than the latest flashy gaming app, Splode is definitely worth it.