This little whodunnit text adventure is available free from Choice Of Games, the enterprising developers who brought you Choice of Dragon and Choice of the Vampire. This one is a bit of a departure from the other titles, since it’s fairly short and has no roleplaying qualities, relying instead on solid detective skills and a desire to channel your inner Sam Spade.

You play as an off-duty detective who just happens to get sucked into a homicide investigation when someone is killed in the projection booth of the movie you’re watching. Because you’re such an ace investigator, you quickly find yourself responsible for questioning the witnesses, examining the evidence, and piecing together all the valuable clues to identify the murderer.

This is much shorter than many of the other “Choice of” games, but it poses a very specific challenge, so it can be trickier, take a lot longer, and require multiple runs before you find the “good” ending. Unfortunately, unlike the other “Choice of” games, replay value is limited, and playing through the game multiple times can feel extremely tedious, since you’ll spend the majority of your time recollecting information you already learned your last time through. 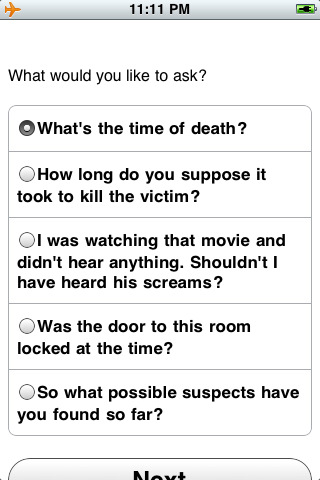 Getting the “good” ending is actually surprisingly difficult, and it warns you before starting that you’ll want a pen and paper handy for notes. This was actually one of the things I really disliked about the game, since there absolutely should have been a way to track known information in game, but it’s also true that this is a complicated mystery with many moving parts.

Deductive reasoning is required, as is a serious eye for detail and methodical investigation, but much of the action feels dull and repetitive. No doubt real police work can be tedious, but if I’m playing a game, I expect some interesting drama and action. It’s frustrating and even boring to revisit every single option with each new piece of evidence, and the story and characters simply aren’t compelling enough to keep you engaged.

As a technical challenge, Popcorn, Soda…Murder? is fairly impressive, with heaps of information packed into a dense, chewy, little murder mystery, but the prose is fairly bland and the story progresses at a plodding, frequently maddening pace, where it becomes a feat to reach any ending at all, never mind the good one. The game is free, however, so you can have a go and decide if you like it or not without spending a dime, and while it may not be the best of “Choice of” offerings, it’s worth a look if you’re of a wordy bent.