What is with me and destroying stuff? Why does seeing dozens of damage numbers exploding out from a group of enemy units feel so very satisfying? NeoSteamer takes that feeling of destroying everything around you and really gives you the sense of accomplishment when you level up and clear a level with minimal damage and I’m here to tell you why. Brought to us by Project BS, NeoSteamer is a 3D Tank game available on the iPhone, iPod touch, and iPad for $0.99 and a free version.

NeoSteamer looks great. The menu and user interface really gives me the old Metal Slug feeling, with hand-drawn textures and photoshopped metal stains. The 3D is done right in this game. Your tank is this futuristic jet-looking thing that strolls right into an enemy swarm. The enemy consists of what looks like Maoi head statues….. which is kind of weird, but they look distinctly different. My favorite is the particle effects and damage numbers. Watching a large group of enemies swarm me, hitting them with my Area-of-Effect attack that deals massive damage to all of them, effectively killing them all in one hit is so satisfying, I feel like stopping this review just so I can go and play it again. 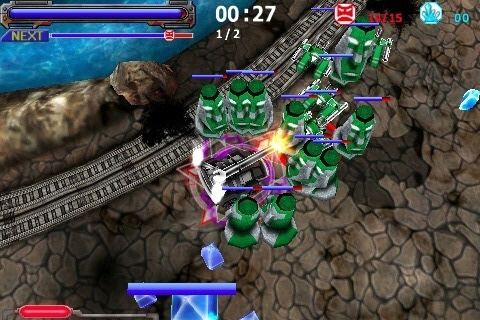 That leads me to gameplay. The controls are solid. Touch the screen to move to where you touched, tap the tank to see your alternate attacks or to heal at a repair station, and tap an enemy to fire at them. Levels have 3 modes: Mission (where you basically play a beginners mode of the level), Offense (where you go hunting for enemies and try to clear them all out), and Defense (where you guard a blue crystal from swarms)

Let me just say, the Steam Cannon is one of the most useful skills in the game. Next up would be Body Check. Here’s why. Body check stuns all the enemies around you and has a fast recharge rate. Steam Cannon hits everything around you for massive damage. Stun, explode, shoot of the stray survivors and wait… waiting heals you and allows your steam cannon to recharge for another group. That’s pretty much the game… and it’s actually pretty engaging. The enemy swarms hit hard and hit fast, they come in huge groups sometimes and most of the time, and you’ll be running in a circle around them trying to pick them off one at a time until you recharge your abilities. It’s pretty hectic. 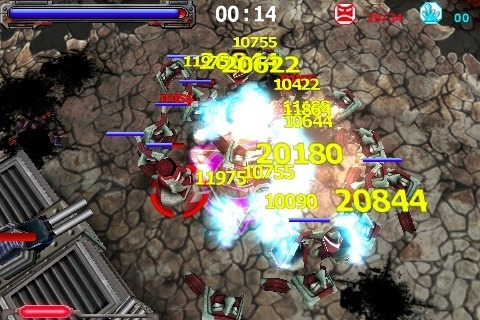 The point of the game is moving through the levels pick up blue gems that give you the ability to upgrade your tank. The more enemies you destroy the more gems you can get, which is why constantly clearing the same map becomes easier over time and more satisfying each time.

You get access to 3 different tanks of different strengths and weaknesses and there are many different levels, though for a majority of the time, you are running around the same map screen with different enemy placements. It’s all very good thanks in part to the constant upgrading and combat system, but I would have really liked it if they changed up the individual levels. Simple elements like changing the time of the level like morning, afternoon, or night time lighting can add more variety to the levels. In later levels, they introduce bipedal robots… which I loved to destroy! Why couldn’t there be more enemies like that in the beginning? Maybe duck-walkers, other tanks, or maybe tiny Terminator style skeletons? That would be much more appropriate compared to current Maoi heads bouncing around, confusing me…

I personally really liked this game. It builds up through your own leveling up and each upgrade is noticeably effective so it’s very well done and repeating a level gets faster and more fun. I love the look, and I’m straight up addicted to seeing how powerful my cannon can get. This game comes with a free version. Play it!