Full Moon: Warrior Within is a side scrolling beat-em up game. You play as 4 different characters with different attacks, special attacks, and transformations. 4 different dudes from 4 different clans are out searching for the rest of their team members by killing tons of enemies. Full Moon Warrior Within is by NJoy Entertainment Group, Inc on the iPhone, iPod touch, and iPad for $0.99.

There are some interesting aspects to the game. You have an on-screen interface and speed modifier options. You have a jump button, special moves, dash moves, grab moves, and combos you can do. Like all beat-em up games, you can punch trash cans to reveal food that you immediately eat to regain health. I’m sure normally, you’ll have a horrible stomach cramp and probably get really sick, but it’s a throwback to the classic age of gaming, so it makes sense here. 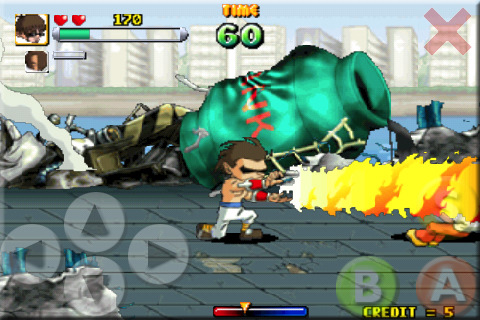 Each character has slightly different variations on their attacks, but most of the time; it’s the same tactic of mashing attack and finding transformation powerups to grow stronger. You have two different transformations; stronger form and god form. Transform once and you turn into a slightly more animal-like fighter with stronger attacks. In God form, you fly around very fast and have access to an extremely powerful projectile type attack that usually knocks enemies down. It’s pretty balanced since you aren’t invincible during this period of obscene strength and it does add some dimension to the fighting system.

Enemies and their designs are pretty standard with the exception of the bosses. All the normal enemies are basically the same and are the standard ‘stand there and punch at you’ type of obstacles in the game. Bosses have a variety of big attacks and they are generally resistant to knockdown attacks. They also say something really odd and ‘Engrish’ at you before you fight them. There are also extremely cheap, difficult to avoid full screen obstacles/enemies that periodically fly by. Bikers with weapons, giant barrels, and the like all deal damage to you, only give you a split second warning before they appear, and if you are walking towards that direction of the screen when they pop up, it’s impossible to dodge or jump over them. I found them unfair. 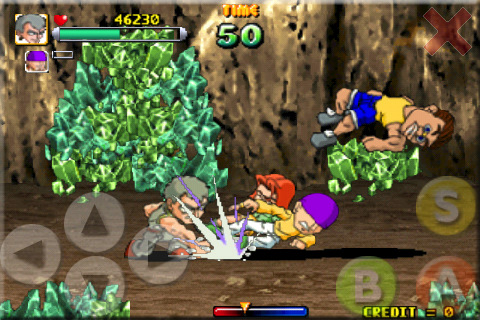 The graphics… the graphics are… um… terrible. I don’t have any clue what the standards are for all the other reviewers of this app, including the people in the comments, but this 2010 and the games on the SNES, heck, the NES were far better. Everything in Full Moon: Warrior Within is grainy, compressed, and unclean. Edges have artifacts from compression or just plain sloppiness. They need to pull their resources and learn some Adobe Illustrator or Flash skills to make some clean, crisp lines for this game app. This would probably look a million times worse on the iPad or iPhone 4g. Heck, on one stage, in the mountains, there are gems in the background that look like they were ripped right from another game because the details in them are completely different then what was presented to us earlier. It’s a major issue because it’s so clearly prominent and yet reviewers are saying how they love the look and how the graphics are great. I felt mislead after playing this.

Full Moon: Warrior Within is not a bad game. The mechanics work and they have a decent beat-em up game. I would really love to see this game’s art style match it’s icon since the line art in the icon is better then everything I saw in the game. They could also just remove the speed modifiers since anything less than ‘fast’ are useless and feel like lag. Decent mechanics wrapped in a blurry, compressed, mess of pixels.

Here is a video demo of the Full Moon: Warrior Within app on the iPhone

This 3rd Party App is available at the Apple iTunes AppStore. Browse the full list of all AppStore apps filed under the AppStore category.
Download Full Moon: Warrior Within at iTunes App Store
Price: $0.99
Developer: Website
AppSafari review of Full Moon: Warrior Within was written by Joseph Ho on October 14th, 2010 and categorized under App Store, Beat-em Up, Games. Page viewed 6188 times, 1 so far today. Need help on using these apps? Please read the Help Page.