When I first saw screenshots of Super Fashion Puzzle, I assumed it would be another match-3 game, but the reality turned out to be rather more confusing and mildly depressing. For one thing, it’s not at all a match-3 game, and trying to play it as one will only result in puzzled frustration, I say from experience. Rather than repeating my mistake, make sure to actually check out the instructions if you’re determined to play this unfortunate fashion fiasco.

First up, pay attention to the girl on the side. Yes, I know she looks like a Lisa Frank drag queen, but I am assured she represents the very height of fashion. Items from her outfit can be found in the grid on the right. All you need to do is pair items the glowering Ru Paul on the side is wearing, and that’s it. They don’t even need to be next to each other; just tap one icon to select, and then tap an identical icon to remove them both from the grid. Easy. 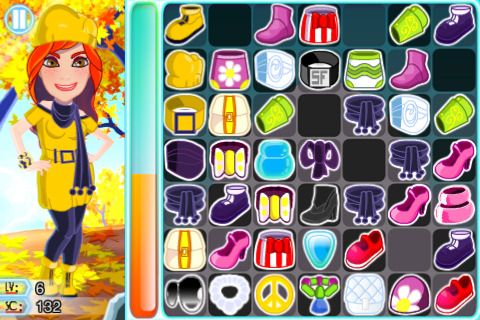 The only challenge is in identifying exactly what each fashion plate is wearing, and some of the icons are a little more abstract than others. For example, it took me ages to figure out that two little blue blobs on one screen were supposed to represent the bangles worn by the model. Most of the time, items are super color-coordinated, so it’s not terribly hard to pick out the right ones, even if you’re unclear exactly what you’re selecting, it only takes a little trial and error before you get the hang of things. 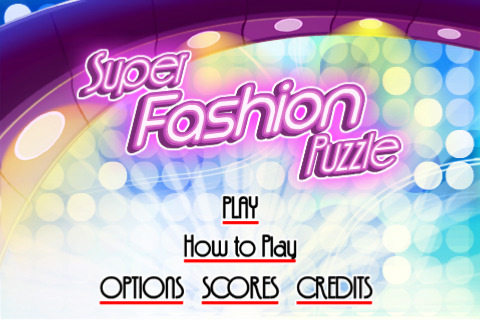 If you don’t have a morbid fear of women’s clothing, this is not a hard game at all. The bigger issue is that it’s much too easy and incredibly repetitive. It’s on par with playing Memory, only the cards are face up. I imagine that the developers were hoping to target young girls, and I’m not a parent, but if I were, I would seriously think twice before giving this to my impressionable daughter. The outfits aren’t inappropriate, just kind of ugly, and the game isn’t particularly fun, so there aren’t a whole lot of redeeming qualities.

The one thing Super Fashion Puzzle has going for it is the art style. I know I said the outfits are ugly, but the graphics themselves are very bold, colorful, and eye-catching. It has the kind of clean line appeal as many popular avatar creators, but there’s no room for creative flair or customization in Super Fashion Puzzle, which is just mildly baffling to me. In my opinion, being able to unlock a virtual paper doll would be the main point of a game like this, but there’s no fun dress-up features whatsoever.

It’s got the look, but the game itself seems to think that our tiny girl brains can’t handle anything other than matching accessories to each other, which is just disappointing.