Believe it or not, but underneath that unfortunate mouthful of a title is actually a very cute and pleasant puzzle game. Gardening enthusiasts shouldn’t get their hopes up too much for this one though, since it’s more about flexing your brain power than having a green thumb.

Although Flower Garden Logical Game might seem like an Engrish disaster waiting to happen, the game itself is a simple and rather addictive tile based puzzle game, similar, but smarter than your average match-3 game. 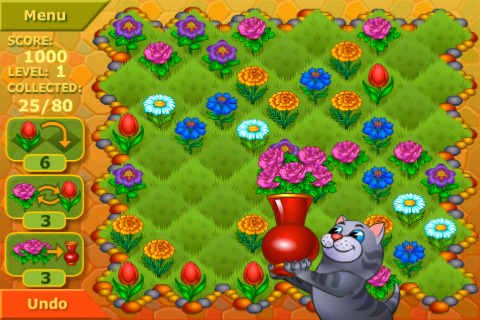 You start off with a grid and a few randomly generated flower tiles. Each turn, you can either move a flower to an empty space or swap it with another flower. New flowers appear every turn, and if you run out of room, it’s game over. Get at least 5 of the same flowers touching and you can remove the patch by touching it for a few seconds. Groups don’t have to be in a straight line, but flowers are only considered “touching” if they meet on a side, so diagonally placed flowers don’t count.

Flowers generate depending on what kind of move you make, so if you move a flower to an empty square, it might pop up 6 new flowers, but swapping it with another flower might only generate 3. The more flowers on the board, the more strategic your moves need to be. As you level up, each turn becomes more critical as each precious square gets filled. 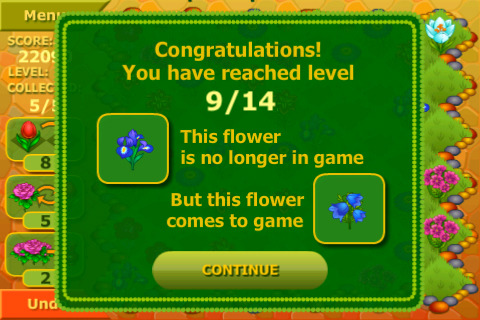 Generally speaking, Flower Garden is a satisfying challenge if you like puzzle games, but it’s also fairly basic and doesn’t come with a lot of extras. The sound and visuals are pleasant enough, but they’re rather generic and nothing special. I confess to being especially disappointed by the choice of using stereotypically “girls only” graphics. I know it’s a marketing tactic, but 1) women aren’t drawn in solely by cartoon cats and flowers, and 2) this is a legitimate puzzle type that could be enjoyed by anyone, so why limit it? I’m not saying this is an especially original and exciting puzzle game, but it’s a puzzle type I haven’t seen frequently in the App Store.

If you’re hankering for a new puzzle game that’s a step up from match-3 dreck, you might want to give Flower Garden Logical Game a try. Although it won’t knock your socks off, it’s an approachable puzzle game that’s challenging once you get going and nicely low key, best for non-gamers who just want a little extra mental stimulation.