Greetings and salutations, my fellow wordsmiths! I have a fresh game for you today, Jumbline 2, the sequel to the highly rated anagram game, Jumbline. It won’t blow your mind with innovative gameplay, but it will let you rearrange letters to your hearts content.

Just so we’re on the same page, an anagram is a word made out of letters of another word, so DEVIL can be rearranged to spell LIVED, and strictly speaking, Jumbline 2 uses word jumbles instead of anagrams. With word jumbles, you can use all or some of the letters involved, so the letters in DEVIL could also make LIVE, VILE, LID, LIE, etc. No doubt you’ve encountered this type of game in the past. 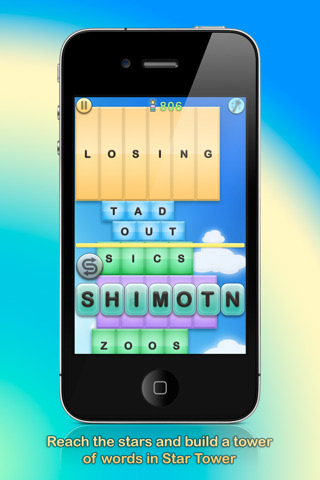 Anyway, Jumbline 2 takes this classic word game and gives it a bright and shiny new facelift. Clean, crisp graphics and the fancy touch interface bring word games into the 21st century and gives it some special touches with three different modes to play in: Classic, Cloud Pop, and Star Tower.

Classic gives you a time limit and a jumble of letters along the bottom, and you want to try to find all the words that use those letters. Most importantly, you want to find the word or words that use all of the letters available, because those words unlock the next level. You can select how many letters to use before you start, either 5, 6, or 7, and you can choose whether or not to include “Expert Words”.

I like to think my vocabulary is pretty beefy, but the Expert Words were kicking my butt with all sorts of archaic and unusual words, so I would advise you to not take that setting too lightly. You can tap on a word to see its definition at the end of a level, but that feature doesn’t help you much when you’re still scrambling to complete the level before time runs out.

Cloud Pop and Star Tower are variations on this same style of tangled word play, where Cloud Pop floats clouds across the screen with a mixed up word on each one for you to decipher, and Star Tower gives you a constantly refilling jumble of letters to pull from, a la Scrabble, to build a tower of words with. Every mode has a fairly challenging time limit, so you definitely want to have your mental dictionary at the ready. 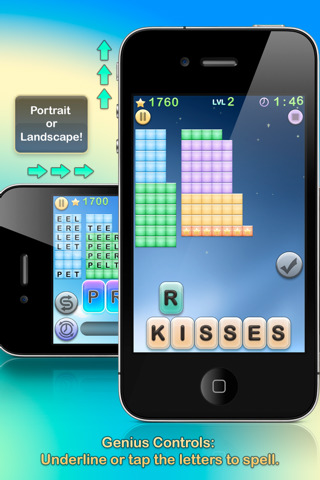 There are also a whole host of OpenFeint achievements and leaderboards to amuse yourself with, although I thought many of the achievements were rather on the easy side. Overall, Jumbline 2 comes with enough bells and whistles to take a fairly basic game and make it something worth noticing, thanks in part to a smooth interface, bright graphics, and a generally professional polish. It won’t change the face of gaming, but it is a very solid and steady performer that you may find yourself revisiting again and again.