Can you hear the sound of taunting? “Tap, tap, as fast as you can! You won’t like me, because I’m not actually the rhythm game you were expecting.” This is about what my initial reaction to Bayo Bongo was like. After playing a bit, my opinion of the game improved, but not as much as I’d hoped.

Don’t let the name fool you; this isn’t a rhythm or music game in any way. While Bayo Bongo initially looks like some kind of match-3 variant, but is actually a “tap as fast as you can” game. The multi-colored grid of blocks definitely has all the trappings of a puzzler, but once you get started, you quickly realize that the game is much simpler than it seems. 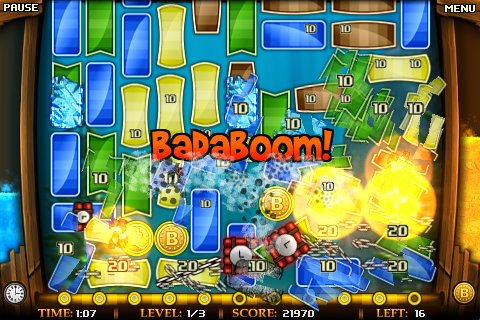 All you have to do is tap matching colored blocks as quickly as you can. They don’t have to be touching, but all the selected blocks will explode and disappear after a short time. This allows you to set up fairly massive chain reactions and a pretty light show, but it doesn’t require a lot of skill and planning to pull off. All you really need is speed, but your goal is to get random coins sprinkled throughout all the way to the bottom. Get the coins to the bottom and the level ends.

Of course, it does get a little harder in later levels, when additional obstacles like iced-over blocks and chains get introduced, but not a lot. To get rid of frozen or chained blocks, you need to set off a bomb block next to them. Bomb blocks are created by setting off large combo chains. Later levels can be challenging, but they start to feel very repetitive after awhile. 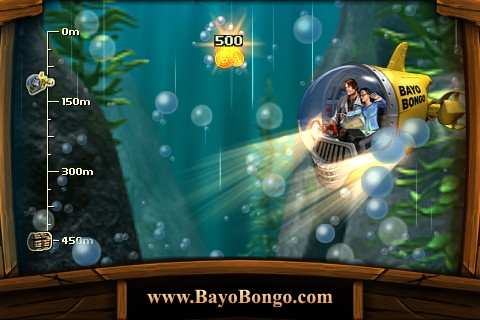 Between rounds, you’re subjected to a mini-game of sorts that has you tapping coins as a mini-submarine descends to the depths of the ocean in search of treasure. Unfortunately, these “bonus round” are particularly repetitive and tedious, which is a recurring problem throughout the game, and I encountered a few glitches here and there that caused this portion to display very oddly.

I will grant that in general, the game looks very nice and handles well, with bright, clear graphics with an underwater exploration theme that display nicely and a tap mechanism that’s reasonably responsive. The cheerfully cheesy announcer who pops up throughout the game is also amusing, but the game’s overall impression is boring, despite the professional polish. The levels feel like minor variations on each other, and with only 15 levels, there aren’t even very many of them.

Although I’ve never played anything quite like it, Bayo Bongo still doesn’t feel particularly original. The visuals and interface are solid, but despite being a universal app available for both iPhone and iPad, the current sale price of $1.99 still strikes me as too high for the relatively slender content. Bayo Bongo isn’t a terrible game, but although it offers up plenty of fast-paced action, it feels far too repetitive to be genuinely enjoyable.