You know what my iPhone was missing all this time? Something that I’ve always been wanting but never realized it? Bird vomit. Bird vomiting into the mouths of its babies. Oh yeah. That’s the stuff. Mama Bird is a game where you run around a level as a bird, then you have to fly to your babies and vomit in their mouths—oh man, what did I just type? Mama Bird is released by Planet Sucko and is a universal app designed for the iPhone, iPod touch and iPad for $0.99.

Alright, the way the game plays is as simple as you get. You tap a button to flap your wings and fly. You have to dodge cats, eagles, crabs, all the while collecting the little worms and food on the floor, then fly up to your babies, and touch the puke button to try and land some food into their mouths to feed them. The point of the game is that there are two bars you have to manage: Health and Food. Your babies have a hunger bar that reduces periodically and if it becomes empty, they die. You have to gather food and that fills your food bar. Vomiting drains the bar so you have to carefully drop the food in order to manage their starvation and your disgust—I mean, manage their health. 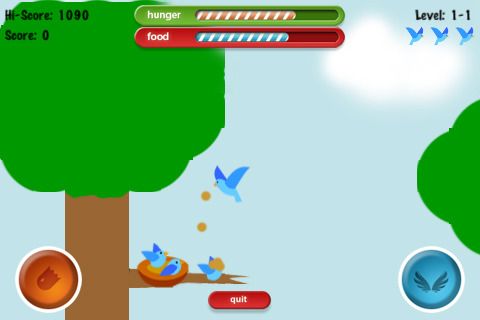 Artistically, Mama Bird is weaker than most game apps, but they serve their purpose as placeholders. You have flat solid shapes as your main art form with the odd overly detailed objects like a street lamp that looks like it was a photo-shop layer effect applied to something from Google images and saved as a compressed jpeg which was then imported into flash. There are 3 stages: Two trees, a street with a light pole, and a beach with a palm tree. Surprisingly, both the street and beach level have a distinct style. Just enough detail to give the stage some life and some appeal, though it’s mostly lost in the iPhone version since it’s zoomed in and the screen only shows so much detail at any given time. 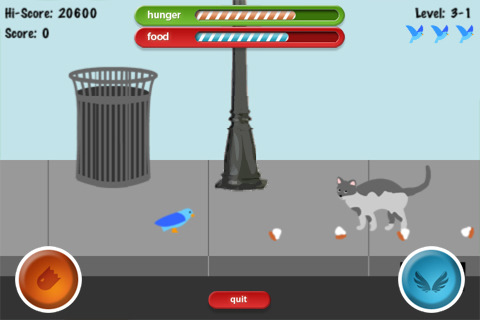 The gameplay is pretty decent with its balance of dodging, maintaining flight, and feeding of your little birds. Your vomit can act as a weapon against the enemies by stunning them. Overall, it works together pretty well. Apparently in their very next update, they are planning on enhancing the look and feel of the game. To be honest, I am looking forward to seeing how this game will look past version 1.5. Mama Bird is a decent simple game that held my attention for almost half an hour. Any game that can do that immediately gets points in my book. Check this one out for just a buck and definitely try it when they update their graphics.