Fierce competition soaked in blood and metal, decapitations, and swords slamming into shields with epic battles to the death! Ahh, and of course magical thunder, fireballs, armor enchantments, and battles against orcs, skeletons, and demons in a turn-based combat system….. To the death! Swords and Sandals is a RPG style gladiator game in a Fantasy world of gore and decapitations through taunting. Released by 3RDsense, Swords and Sandals is available on the iPhone, iPod touch, and iPad for $3.99 and has a Lite alternative.

You play a gladiator of your own customizations. You can buy a slew of different armors, magic, and of course, weapons. You can customize them through magical enchantments and you can add different powerups to each of your equipment parts. You have a stat system where you can place focuses on different attributes like strength, vitality, or the ability to use magic. 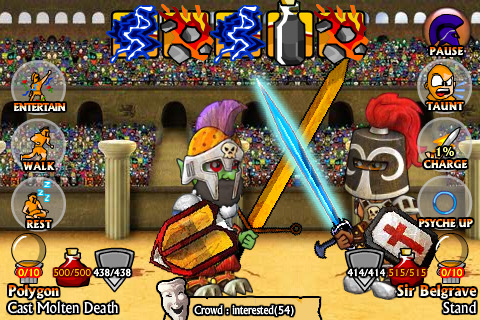 Graphically, this is a mixture of cleaver character creation and really pretty terrible. Your character portrait has a nice amount of detail with all the armor options and when equipped your character will remain consistent in close-ups, in the main village, and in combat. It’s nice to see consistency in the main character, even with a whole bunch of customizations. Character portraits the village buildings like the Church priest, the Tavern gambler, or the Armory guy are really poorly done. Almost all the characters have crossed eyes. I don’t know why. Some look sick due to their skin color.

I played Swords and Sandals in version 1.3 and some big stuff changed since version 1.0 apparently because this is supposed to be the easier version of the game. The battle system is a mixed bag. You see, it runs off random chance for all the attacks and taunts. You attack with different strikes that all have different accuracy ratings and you have to destroy their armor to get to their health. In the Arena, you have two battle modes: First blood; where you have to destroy your opponent’s armor then hit them once that draw blood, and Tournament; where you fight to the death and you have to drain all their health instead of just one hit. 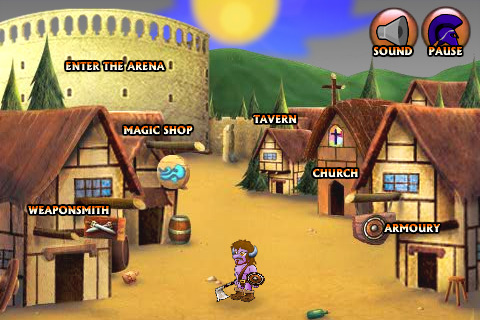 You also have a variety of different options. Half of them are completely useless because it’s based entirely on chance. How would you like to always be pitted against someone 1-2 levels higher than you with better accuracy, health, armor, magic attacks, and equipment? How would you like to be one-hit-killed because the enemy somehow has a ridiculously high level magic ability despite being at your level, so he destroys your armor in one turn, then critically strikes you the second turn and cuts your head off? How would you like to be completely dominated in battle because all that expensive armor you bought is useless against a single magical strike?

I consider the combat to be broken strictly because the enemies are ALWAYS unfair unless you die… where you load up where you left off and the enemies are suddenly 2-3 levels lower than you and you immediately dominate them. The accuracy thing is a stat that you have to increase but it doesn’t matter. Only when facing low level enemies does your attack percentages ever hit 50% or higher. When battling in the tournaments, you are almost always under-level and your attack accuracy is in the 30% range. It-sucks-a-lot.

Better balancing, the ability to gain levels when not fighting to the death, when shopping, have menu lists rather than having to slide to get to the next level of armor or weapons, allow me to enchant my helmet, put enemies at my own level or allow me to have some alternative way of gaining exp rather than just having me die constantly. There is also an extreme amount of lag while in combat that screams inefficient scripts or art management. Something is lagging the battle a lot.

Despite the horrible grinding battles of dying repeatedly, I still went back and played the game. Improving my equipment, increasing my sometimes useless stats (seriously, never upgrade your agility, charisma, or magika stats because they are USELESS for a good majority of the game due to the enemy level imbalance), and hoping for those completely random one-hit-kills to never happen, it’s all a grind that I am well used to thanks to my time playing RPGs and World of Warcraft. This was oddly addictive, but absolutely frustrating at the same time. Another game I’ll be expecting some major updates for.