Ok, so you have this adorably round pig with the ability to roll for long periods of time and fart to accelerate itself. You launch this flatulent oinker via a make-shift slingshot to collect colorful stars, avoid sheep and rocks to try and beat the other Openfeint distance records. Sound fun!? OF COURSE!! Presented by Nexx Studio, Pig Shot is available on the iPhone, iPod touch, and iPad for $0.99.

Finally! How long have I waited for a pig launching distance-game! … Ok, I didn’t expect this kind of game to ever come out. It’s adorable, it’s a clever theme, and it’s surprisingly pleasant. Graphically, this reminds me so much of a Kirby game where you have bright stars, trees with a lovely bright design, and of course, your cute pink round main character. This is a visually attractive game with a great art direction that is supported by nice backgrounds and choice of text font. 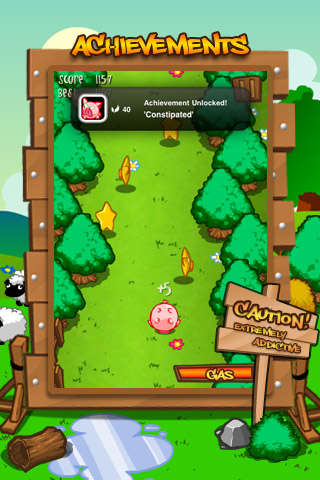 You have a list of challenging achievements, randomized environments and obstacle placements, and a solid control scheme of tilting your iDevice and pulling your piggy back on the slingshot to aim it a certain direction. You have to carefully dodge fences and sheep so the controls are very responsive and it worked great.

I do feel that there should be a bit more however. The rocks and sheep are fine, but why just sheep? With a pig as the main character, you’d expect an entire farm or something. I would also like to see some animation for when you crash into stuff. Imagine running into a farmer and knocking him down or knocking a sheep into the air or even smashing into a fence and breaking it? Apparently, the next update is promising to make Pig Shot a universal app, adding in Retina Display graphics, and more art elements. That would be awesome. 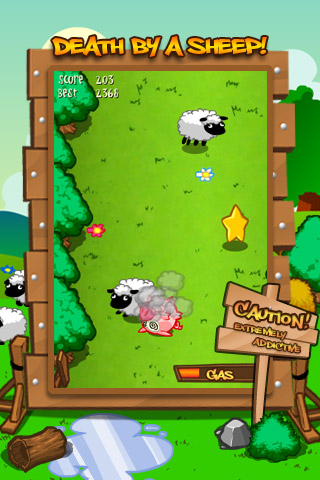 Overall, I really liked Pig Shot. It’s super simple but it’s executed with a solid art style and the developers actually cared about how their app is presented. That is a good thing and it’s appreciated.