Volkswagen’s Touareg Challenge brings nostalgic arcade racing games back with a clever advertising twist – the only car you can drive in this little racing game is the Touareg. The Challenge has two basic modes – Rally and Time Trial, the latter of which is actually unlocked when you first start playing. As you gradually clear each of the 6 levels in Rally, it is also unlocked in Time Trial, where, as it sounds, you’ll be able to play each stage again to achieve a faster time. Passing each level also unlocks different colors and rim styles for you to choose from when customizing your Touareg to race.

However, within both Rally and Time Trial, there are yet another two modes – normal and hybrid. Normal mode only counts your time – to pass each stage in this mode, you just have to drive under a preset time limit. In hybrid mode, however, the amount of gas you use is taken into account. The less gas you use, the better (the Touareg runs on only battery when going slower than 50 km/h); to accommodate for possible slowing down, the set time limit per stage is slightly higher than normal mode. Although the instructions say that gas usage is the most important thing in hybrid mode, you still have to pass each stage within the set time limit. 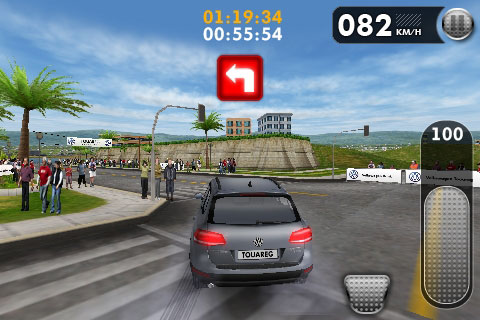 There are also two ways to drive during the game – you can either have the steering be controlled by directly pressing left and right buttons on the screen, or you can use the tilt function of the iPod. Both the gas and brake pedals are touch-reliant in both modes. A rather interesting function is that every time you finish a race, an instant replay begins, showing your just-finished lap from different angles as if cameras around the race track had captured your run. You can control the replay like a video, with the ability to both fast forward and rewind the action. 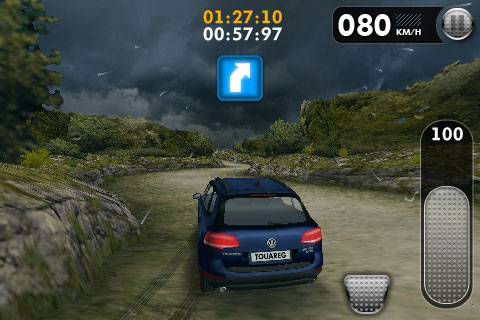 Graphics are clear and pretty crisp – the scenery that goes by as well as the effects of raining during a couple of the stages look very slick. The people that sometimes stand on the side of the track, however, are nondescript and plain, and the clouds of dust that follow the car when you drive on a gravel road are blocky and unrealistic. The background music is not really exceptional, either – the tracks are extremely MIDI sounding and not very interesting in their own right. However, the game is quite good for a free app (and one that’s advertising a product, to boot) and entertaining once you get the hang of the controls. Though the six stages may pass by quickly, the Time Trial will provide impetus for future plays in beating both your own and worldwide scores.