Play Silent Hill on your iDevice! Experience the nightmarish world of darkness and mystery in a first person shooter version of the original—wait what!? An FPS of Silent Hill!? Alright, getting over that, is it good? Does it deserve to be standing amongst one of the most unique horror games of the Playstation/Playstation 2 era? Released by Konami, Silent Hill – The Escape is available on the iPhone, iPod touch, and iPad for a special low price of $0.99 for Halloween!

I grew up with Konami. Castlevania, Metal Gear Solid for the Playstation, and the first true horror game I’ve ever played, Silent Hill. Silent Hill 1, 2, and 3 (I might even include 4) were about atmosphere. A lone person lost in a world of fog, darkness, demons, and insane people. A town where it’s so lonely, so quiet, and so oppressive that stumbling upon one of the nightmarish images in the background (in other words, background images) would startle you. 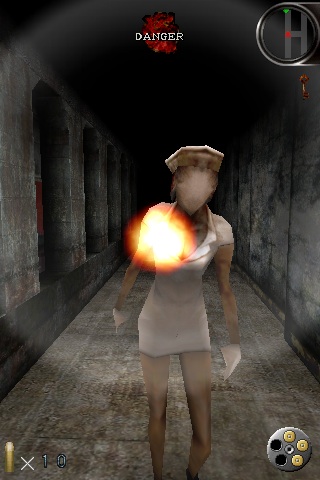 Silent Hill – The Escape is a great looking game. Graphically, the details are very nice, especially in the environments, but the characters vary from nice detailing to extremely low-poly, ugly blobs or red. Most of the time though, the enemies that kill you the most are wheelchairs… great. I must say that the music and ambient noises of the game are actually quite good. Silent Hill has always been good with its soundtrack.

Controls are bad. Personally, I can’t stand the reloading mechanic where you have to tilt your phone to align an outline of the bullet chambers to the gun. Aiming is through tilting the phone which for me, never felt intuitive or as responsive as I wanted. I really wished for a joystick alternative. You die in one hit so the real fear is always fighting the controls, trying not to get lost, and trying to reload. Firing has two modes: tap the screen or tap the back of the iDevice. It’s completely unreliable to use the tap the back control scheme as you have to hold the iDevice to play and that stabilizes the phone so it doesn’t sense the tap very well. Stick with the screen tap.

The pacing is slow and plodding thanks to the movement. You can only move up, down, turn left, or turn right. It’s stiff and limiting to navigation and, again, not intuitive at all while navigating in first person. The enemies don’t chase you directly, instead they wander randomly and don’t seem to take an interest in you, even with your flashlight and radio on (if you played the original games, you’ll understand).

As time went on, Silent Hill’s development was moved to America, where horror was more slasher and gore rather than psychological and haunting. To paraphrase a reviewer, “American developers just don’t get what made Silent Hill scary.” If the controls were better or had alternatives, if the enemies were intelligent, if there were less featureless hallways, and if there were a story right from the tutorial levels, I might have been more into the game. The enemies are just references to better games, the atmosphere, though sometimes extremely tense and scary, were overshadowed by the negatives. Team Silent isn’t in charge of the Silent Hill series anymore; maybe it’s a sign to move on.

Sorry childhood, I guess I should just find my original copy of Silent Hill and play that instead. Now, if Konami were to somehow port the original Silent Hill into the iPhone or translate the Silent Hill novel to English and release that for the AppStore, then COUNT ME IN! I still love Silent Hill, I just didn’t love Silent Hill – The Escape.