Warning, this is a very long review. This is a compilation of 10 games (I’m playing the 1.0.1 version) where each game is claimed to be full high-polished games. Of course, I’m here to see if this is true by reviewing each game. Brought to us by Triniti Interactive Limited, Gamebox 2 is available on the iPhone, iPod touch, and iPad for $2.99. This is a sequel to All-in-1 Gamebox which contains 36 other games.

Let me start by commenting on all the apps at the same time: All the games in this app have really good art, sound design, and each game definitely has a lot of work put into them. For this review, I’ll be once again going over all the individual apps, and I really don’t want to repeat that the graphics are nice over and over again. 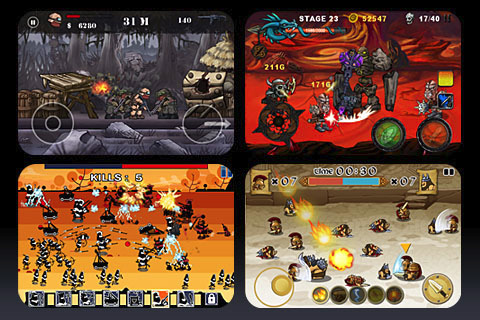 Coast Super Combat: Take a gun and snipe down onto the beach by tapping on them. Tilt your phone to move the camera around left and right to see the field. Kill soldiers, destroy tanks, and protect your base. The challenge is great, the pacing is nice, and the levels are interesting. Upgrades are all noticeable and appreciated, so I was really motivated to play and level up my guns. The RPG-7 is awesome by the way. 5/5

Army Lines: Spawn units and watch as they move across a war zone. Create different units of varying stats and fight off the attacking army. This is a really tough strategy game with not a lot of room for error and there doesn’t seem to be a way increase how fast you gain resources to create your units. In the third level, they force you to use only one unit. It doesn’t matter if you only upgraded your basic unit (you know, the starter that is easiest to create) because they only let you use a slow, expensive, and weak unit. Couldn’t get past it without losing 13 times in order to collect enough points to upgrade my gunners. Bad pacing and gameplay design for that one level. 3.5/5

Pixel Ninja: Move stealthily through enemy bases or villages. Enemies have a limited vision and you can steath-kill them. The controls are responsive and work really well to combat against alerted enemies and evade their views. I do like its art style and comic book style narration. The gameplay reminds me of a very simple version of the original Metal Gear and Tenchu: Stealth Assassins, and that means I really liked it. 5/5 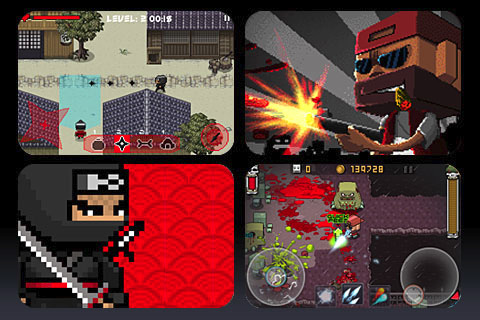 Doodle Truck: Of course. Doodle art style with gameplay that doesn’t take advantage of it at all. You drive a truck that is carrying some boxes and reach the goal by tilting your iDevice to maintain your truck’s balance without losing all your packages. The truck is very prone to flipping, the boxes, as far as I can tell, are near weightless and will go flying every time. A bit frustrating, it’s boring at times, and loses its playability after only a few levels. 3/5

Spartans vs Vikings: Take the gameplay style of Bees vs. Ants where you have towers with a number of units. You invade other castles and hope that your higher numbers will give you the edge. Each turn, you gain more units and the goal is to capture the entire map. The difference comes in that each time you send units from one tower to another, you actually fight the battle with units and magic. The controls and attacking don’t feel natural and are very stiff. I can never tell if my attacks are hitting with the exception of actually seeing their life bars lower. The attack range is very limited for almost all the units and it’s very hard to actually hit the target. This can result in your entire army being wiped out even while having a 2:1 advantage. 2.5/5

Bowman War: Use a timer-based unit spawning system and put them into specific tracks and rows. Defend against a swarming army that comes down the line by creating your units for each individual row Plants vs Zombie style. Your units will run across the screen and eventually disappear so you have to constantly spawn new units. This was a strong entry since the combat is challenging and the controls work perfectly. 5/5

Desert Slug: Metal Slug imitation that has ou side scrolling through levels killing off terrorists. The Metal Slug series have always had really good platforming, excellent weapon usage but most of all, it has this charm to it because of its cartoony art style and ridiculously overpowered weapons. This game lacks all of that and puts it into a realistic setting. The blood and death effects are over the top and it feels kind of uncomfortable to be murdering off randoms as a US soldier of today’s time. I felt dirty after playing it, but it’s a legitimately decent game… 3/5

Death Knight: Sidescroller beat-em-up style game similar to Final Fight or the GBA version of Kingdom Hearts. You run around a field and slash your opponents. The shield button acts as a dodge roll and trust me, you’ll be abusing it to evade your opponent’s attacks. Dodge around and slash your opponents. The store contains a mass of different weapons and upgrades for your armor and shield. Each upgrade has a noticeable appearance change and is very well done. I liked the combat, I liked the pacing of the leveling. The best thing is that healing only costs a 100 gold, which is very little in this game. A personal favorite amongst the GameBox 2 selection. 5/5

Tank Warz: Trajectory game similar to Worms, you control a tank that fires rockets and missiles at a trajectory. You have to destroy missiles, kill enemy tanks, and avoid being destroyed. The environments are all destructible based on where your missiles land and, like Worms, you can get stuck in them or use them to your advantage by dropping an enemy through a hole into more vulnerable areas. The AI is pretty weak, their aim is off, they never move around, and the only challenge is trying to hit them with your missiles since there is little to no help aiming your attacks. Mostly trial and constant error and it loses its appeal when you can never hit an enemy reliably in the first 3 or 4 attacks. 3/5

Crazy John: Cute little cube-headed hicks, victims, and of course, ZOMBIES!! This is a top-down shooter where you run around a graveyard saving victims, collecting missions, gaining powerups, and slaughtering zombies. Auto-aim is a must so before each level, make sure to turn that on. The zombies die in one hit but come in huge swarms. The mission structure is usually a quick blurb from someone, get to the red area, kill zombies. Pretty mindless, but it was great fun overall. 4/5

So what does that make this app in total? You got yourself 4 excellent games in Coast Super Combat, Pixel Ninja, Bowman War, and Death Knight. There is only 1 really bad game in my opinion, which makes 9 out of 10 games that are really playable. I was honestly very surprised.

Woot, this was a 10 game review in one! Overall, GameBox 2 is an excellent deal for the many quality games it actually presents. I was pleasantly surprised since my review of 71 in 1 GameUtilities and I will definitely be looking forward to the promised new games coming in version 1.1. Look for it as well and definitely try this app out for yourself.