What would you do if your brother was kidnapped and held for ransom at the bottom of Devil’s Cliff? If you’re anything like the MatchStick Hero of adot studio’s game app, then you’d jump down feet first to rescue him (horrible pun intended). Like the title implies, you, the hero, are a matchstick figure, and you have to reach the bottom of the cliff before the bullies inflict harm on poor kidnapped Jim.

To scale down the cliff, you must jump down from ledge to ledge–careful though, some are dead ends, some exhibit treadmill action, some cause you to bounce, etc., so look before you leap. Just tile the device left or right to run in either direction. On the way down, there are 6 power-up items you can pick up to help you on your quest; just run into them and you can can HP, collect coins, speed up your running for five seconds, etc. The screen scrolls up as you’re making your way down, so you must always be cognizant of the saw-bladed top of the screen. Falling off ledges and touching the top are automatic losses. There are three game modes to choose from: Easy, Normal, and Insane (be sure to tap the rotating matchstick to actually start the game). 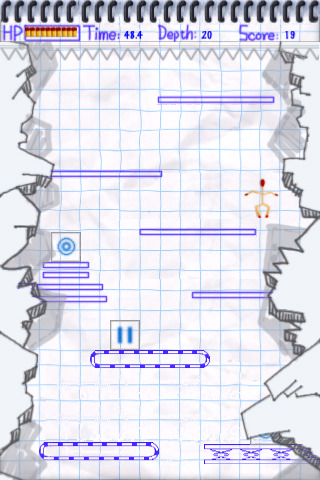 Sometimes when the backgrounds are intentionally reminiscent of pencil and paper, it’s hard to judge aesthetics, but MatchStick Hero has some pretty nice sketched graphics. All the obstacles and power-ups are clearly marked, so you won’t get confused between them; the hero itself is pretty easy to spot. Of course, I have no idea why a matchstick character would be in a sketchbook world–perhaps a pencil hero would have fit the theme a bit better–but we’ll work with it. As such, it wouldn’t hurt to add a little more special effects into this app: it’s just crying for a good burning or smoking effect. The controls are decent enough, but I’d like to have some more smoothness to MatchStick Hero’s movements, as he is a bit jerky (unless that was intentional) and sometimes takes forever to run across a ledge. The background music is a looped track with about four tunes, so it’s rather forgettable after the first few action-filled play-throughs. As a last critique, what exactly happens after we scale the entire 300 meters and save the brother? Unless we get sent on another mission, the replay value of MatchStick Hero is rather low. You could probably get more out of your $0.99 elsewhere, unless future updates are huge.