Historical inaccuracies? Whaaa? Mysterious Hunters pits a team of cavemen and tribal warriors and a Solid Snake hunter guy against a legion of dinosaurs, lizards, and gorillas! Oh my! Released by Quu Entertainment, Mysterious Hunters is available on the iPhone, iPod touch, and the iPad for $0.99. This is also a Game Center app.

I’m starting to like games like these more and more. You have a 2D battle field, you spawn units to deal against the enemy, and you manage them through your resources and careful replacement of killed units. Killing enemies gets you meat, meat buys you more warriors. You only have 4 units you can summon at any given time, so manage them carefully. There is a boss at the end of each level and there are dozens of smaller, tough enemies scattered in front of them. 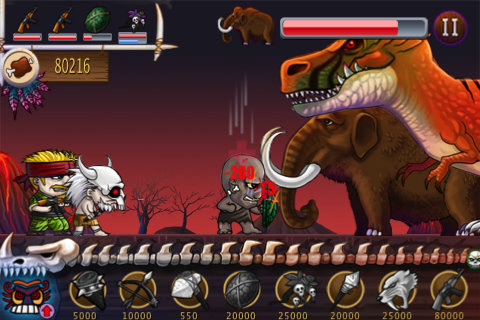 You are given 8 classes to play with: The club warrior, archer, axe warrior, shield man, healer, spearman, a sabertooth rider, and…… machine gunner? Wha? Each class has different uses and with the 4-unit limit, it’s an appreciated challenge to figure out the right balance. My favorite team is one axeman, one club, one gunner, and one healer. Each unit has their own walking speed, so be aware that your gunner will walk way faster than your more durable club warrior and this can get him killed fast, but the shielder walks faster than him. Another thing to consider while making your team in Mysterious Hunters.

I like the system Mysterious Hunters gives for leveling up, but the prices hit ridiculous at higher levels. Replaying the same levels in order to gather resources in order to pay for the level ups brings up some minor annoyances. How come the camera never moves with my units? I will NEVER look back after moving since enemies never spawn there, so many the camera should scroll with the last character I have on screen? Why can’t I ever upgrade how many units I have on the field? I wished for a button that could fast forward the fights since there really isn’t much to see until a unit dies or the enemy is destroyed. I also wished to see my enemy’s health bars constantly until they die since I can only attack one enemy at a time, and when it comes to boss battles, I want to see its health constantly without it disappearing every 3 seconds. Maybe the health bars of each enemy should hover over their heads instead? 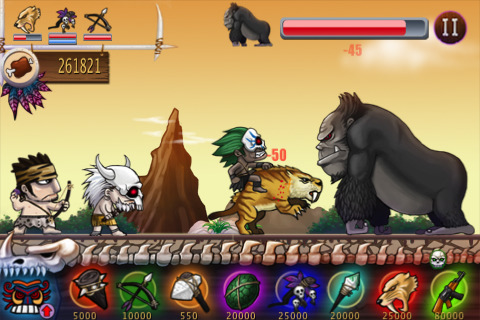 I had a bit of fun learning the different classes and leveling them up, but the combat is limited and it’s actually pretty painful paying so much meat for a unit that dies during a boss battle since this is the same amount of meat you have when you go to the next stage. I also would like to see what the units did right from the character leveling screen. I shouldn’t have to pay huge upgrades to see that the sabertooth rider can deal x4 damage at random, or that the spearman poisons and stuns an enemy, or that at higher levels, club and axe warriors can stun the enemy every 10-20 seconds.

With maybe the ability to increase how many units I can summon, a fast forwarding feature, auto-scrolling, or some added unit information in the level up screen, Mysterious Hunters could hit some more fun peaks. At the moment though, it’s a neutral game. It doesn’t have big disappointments, so I’ll just say that this is an entertaining game with plenty of room for improvements. Try it out but don’t expect fast paced action… this is for people who can stand grinding similar to World of Warcraft.