Take a simple game of paths and circles and turn it into one heck of a challenging puzzle game. Subway Shuffle uses the loosely applied theme of subway tracks and nodes and pushes your brain, tests your logic, and helps you lose track of time. Released by Aubrey’s Puzzles, Subway Shuffle is available on the iPhone, iPod touch, and iPad for $1.99 with a Lite version available as well.

Sheesh, so I was replaying stages to get the minimal steps possible, and when I get a text message, I exit out and realize that I’ve been playing this game for 2 hours straight. The graphics are clean and simple; the interface reminds me of an image gallery than a gaming interface, so don’t think of this as a game, and more like a newspaper crossword, but in an interactive puzzle. 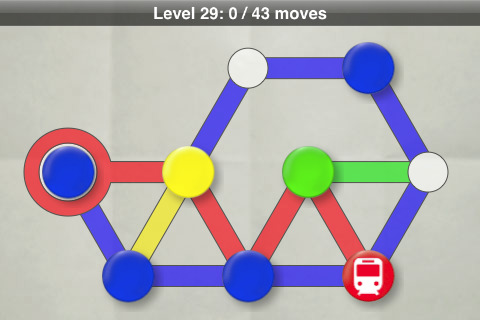 There isn’t a whole lot to talk about for Subway Shuffle. There aren’t musical scores or great sound effects, there are no actual subway cars in rendered 3D or anything fancy. You get circles, you get tracks that have the same color as your circles, and each circle is limited to individual tracks. Get the red subway car circle to the goal and that’s pretty much it. Each level brings a whole new level of difficulty and your goal is to minimalize the number of moves you make. Some puzzles hit 50 moves, which can really be time consuming. 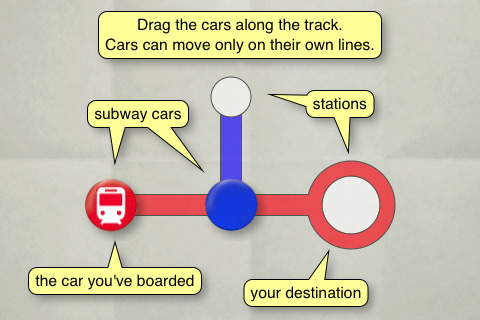 Play this. If you have a thing for puzzles, definitely try this game and wrap your brain around the many different levels. They recently updated to 100 puzzles, you can undo your moves, and there are some new ways to change the sound and appearance of the game. Worth the price completely.