Political Fury: The Knowledge Battle is a game that reinforces your hatred for the opposite party. It was developed by Super Boise LLC, costs $0.99, and can be used on an iPhone, iPod Touch, and iPad.

Political Fury is a trivia app that pits you against a player who is affiliated with the opposite political party. Keep in mind that this app is exclusively online only so if you want to play it you have to be connected to the Internet. The game is an online game because with each “victory” your party’s “knowledge score” rises. The opening graphic is none other than Democrats represented by a blue donkey with a boxing glove on the left, and Republicans, a red elephant with a boxing glove on the right. This game tests your ability to represent your party proudly with your political savvy and intellect. 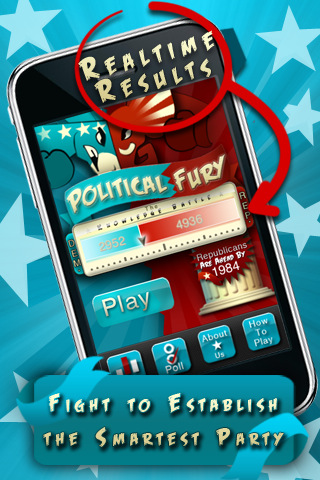 The first step when you open Political Fury is stating whether you are a Republican or Democrat. Before you choose you are warned that you cannot change from one party to the other. The trivia questions come from four categories including, Politics, Current Events, History, and Geography. You get to choose what kind of questions you want to be asked from those categories, and then you are put into the ring with a fellow Political Fury user who has registered with the opposite party. While you play the user you can see what geographical area the person is from in the lower left section of the screen. A low point that I experienced while playing was a loss inflicted by a user from Ontario, Canada. The questions are given as multiple choice. One thing you are always aware of when you play is the ongoing score between the two parties and your overall grade. Your grade is given as a Report Card based on your success rate, reaction time, games played and party average. 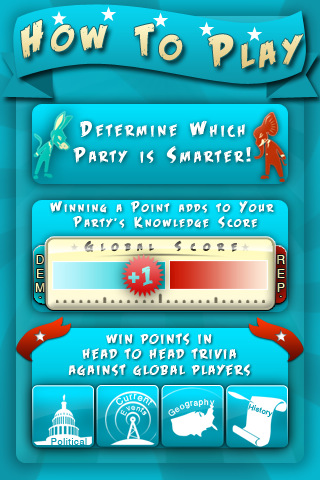 The overall tally of each party remains relatively close and almost every hour the winning party changes. I noticed my competitive nature was intensified by the fact that I was playing for “a team” against people affiliated with the opposite political party. It definitely serves as the peaceful way to blow off steam and frustration.