It’s no secret that word games are big business on the iPhone. There are dozens and dozens of games marketed towards intrepid wordsmiths, and most of these take on familiar forms, riffing on Scrabble, Boggle, or whatever much beloved family word game you can think of. Originality is a little harder to come by, so I can appreciate Wordulator trying to step outside the box a little and bring something fresh to a familiar standby.

The game works basically like any other anagram game out there: you start with a stock of letters and try to make words from them, but the twist comes in how the letters are structured. Letter tiles are arranged in a 5 x 5 grid, but it’s useful to think of the grid more like a onion, with a single letter at the center, surrounded by two layers of increasing size. Initially, you can select letters from anywhere in the grid, but once you’re “in” a layer, you can’t move back “out”. 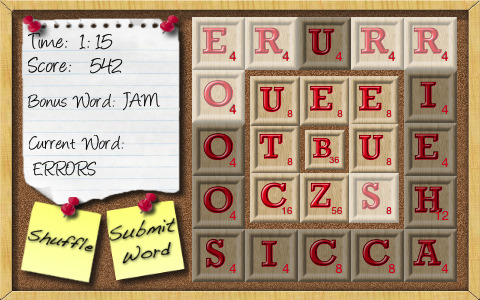 For example, if you choose a letter from along the edge, the outermost layer, you can then pick any letter from that layer (letters don’t have to touch, like in Boggle), but if you choose a letter from the middle layer, you can no longer use any letters from the outer layer. Which means, if you use the center tile, that better be the last letter in your word. Tiles increase in worth the further in you go, so it’s usually worthwhile to move in when you can.

Words must be at least three letters long, and the faster you make them the better your score. There are also random bonus words you can try to make. I couldn’t really determine exactly what the difference between the four different playing modes was, although I suspect it may have had something to do with the kinds of letters being distributed. 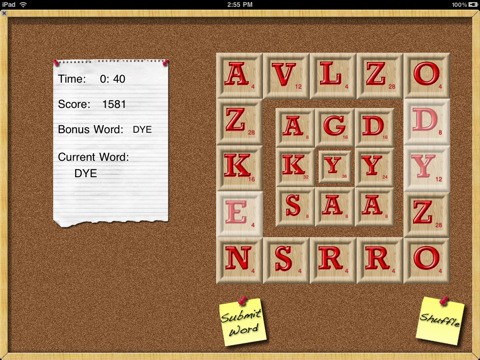 Although it’s mildly addictive on one level, I don’t know that I would describe Wordulator as super fun. In terms of gameplay, Wordulator is definitely a change from the Scrabble clones, and quite challenging to boot, but looks-wise, it’s not the prettiest or most polished app out there. The dictionary is surprisingly limited, and the graphics and overall presentation are just plain blah. Also, unless you’re a diehard high score chaser, the Game Center integration is mostly lackluster and only provides a mild amount of replay motivation.

Right now, Wordulator is a little fish in a very, very crowded pond, and it needs a lot more pizzazz and polish if its ever going to justify its $1.99 price tag.