Road to Emerald takes the legendary 1939 film “The Wizard of Oz” and does what so many fanfic-ers have already done: turn it into a Japanime choose-your-own-adventure J-pop extravaganza! J-Pop, anime, and Oz, oh my! Developed by ImageCircus, Ren’ai Shugi Road to Emerald is available on the iPhone, iPod touch, and iPad for $1.99.

I’ve been a fan of Japanese anime and music for years now, but there was always a part of the culture that I never got into; Shojo. Shojo (according to Shojo Beat), is a class of media aimed at young girls. I have absolutely no interest. But that really didn’t stop me from taking several hours out of my day to play Road to Emerald. 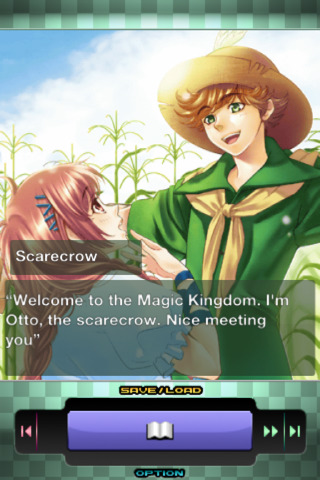 Here we have an interactive novel that requires multiple play-throughs to get all the backstory, nuances, and hidden tidbits about all the characters. Take for example, one of the earliest choices you have in the narrative is to either ignore a character’s annoyingly bratty attitude or call him out on it and make him apologize. This changes how we get his backstory and we can see some different dialog. 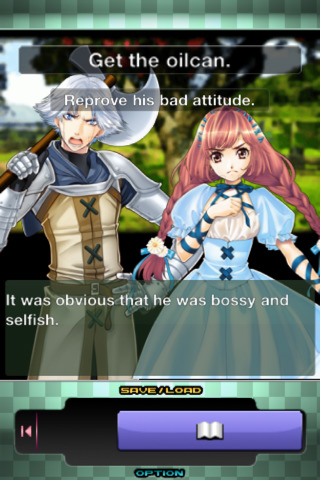 Let’s meet the characters: First, we have our main character, Makoto. She is a schoolgirl who just picked up her own copy of the Wizard of Oz. Suddenly, she is warped right into the book and into a strange world of Ani-Oz. Here, we meet our 3 other main characters: Otto “The Scarecrow”, Gragg “The Tin Man”, and Friday “The Lion”. Each are depicted as young men of different personalities. This game could have easily become a dating simulator for young girls to interact with these characters… though I have to say, Friday the Lion is pretty much a bondage slave with a thing for showing off his bare abs. It’s really disturbing (lol).

Fan-girl fantasy aside, each character is drawn extremely well, the style looking like any Shojo anime. Environments are alright, though definitely not the main focus at all. There are also some odd moments where you really need to use your imagination since the art doesn’t exactly reproduce a visual representation… though I really do NOT want to get into that one…

The story is a mix of really solid story telling with nice dialog, realistic use of words, and engaging storyline, and absolutely brain numbing anime stereotypes. Characters are just stock at times. You have the kind-hearted dork, the diamond in the rough with a heart of gold, and the effeminate cat-boy with submissive undertones… oh god, what has this review become… Reading through the stereotypical characterizations can be tedious to someone like me… you know… a guy with no interest in other guys… so yeah, it was pretty uncomfortable to realize that this story is not meant for me at all. Still, by the end, you learn to care about the main character and you eventually choose one of the guys to root for in their semi-romantic story.

The story is engaging, though the dialog and controls for the story are sketchy. Controls involve sliding a giant button up, down, left, or right. Why they couldn’t have buttons confuse me, but hey, it’s an iDevice game… gimmicky unnecessary misuse of the touch screen should be expected. This is a minor unintuitive issue however so it barely hurts Road to Emerald. Strong art, interesting story, ‘interesting’ characters, and excellent presentation make this a unique experience.

Those of you interested in fan fictions, the original Wizard of Oz story, or fans of shojo manga or anime, you might get a kick out of this one. Be prepared for lots of story but not a lot of decent gameplay… so Heavy Rain fans might love this one.