Monster Fights puts you into the driver seat of a giant monster that has to rescue its child from the humans. You rampage through their fortified towns and experience a desperate rescue mission from the other shoe. Developed by Zealm Inc, Monster Fights is available on the iPhone, iPod touch, and iPad and was recently updated into a Universal App. You can pick this game up for $2.99.

I was impressed with the graphics of Monster Fights. Backgrounds fade into the distance with lovely colorful fog giving things a wide open feel despite being extremely linear in gameplay. The monster looks pretty good on the small iPhone screen and much of it reminds me of Spyro the Dragon or Crash Bandicoot when they were still on the Playstation. Pretty high production value, especially with a very nice background music soundtrack. Sound effects work well though most of the sounds become very repetitive with the way this game works. 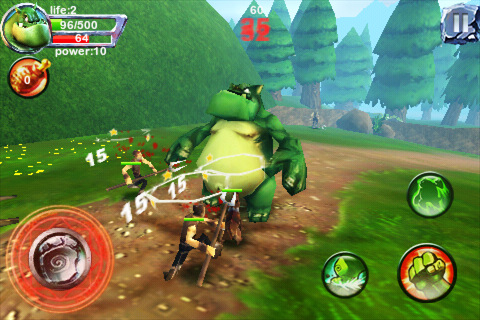 Ok, the way the game works is you are a giant monster moving through towns, castles, canyons, and other neat looking locales killing soldiers who attack you when you come in range. You can then deal with the enemies by tapping the punch button to swipe at all enemies in front of you, jump button to jump and combine it with the punch button to club downwards for higher damage, the trample button to stomp and stun enemies. You have a spin attack, a rage ability, you have the ability to toss rocks, and if you tap the meat button after collecting some off your enemies, you can regain health. All of this is explained very nicely in the Help document with nice images and descriptions. 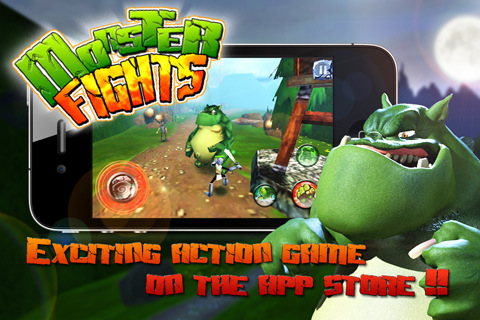 The combat is slow. Enemies take a lot of damage and you will end up losing life from each enemy no matter how skilled you are at the game. Your monster walks most of the time very slowly and there is no run button… which makes the tedious combat against a single enemy even worse when you have to move from one long drawn out button mash to another… very…slowly… Which is unfortunate since this is, in concept, the dream game of a lot of players: To play a crazy powerful monster that stomps all over a village.

If the enemies were weaker, like 1-2 hits weaker, but came in swarms, get launched into the distance from big attacks, get squashed under your feet from each jump, or you can pick one up and toss him at towers or a big group of enemies, just imagine the crazy oppritunities Monster Fights could have had. Full scaled war with you tossing soldiers at other monster? Squash a bunch of enemies to gain rage and activate it to 1-hit-kill all your enemies?

As it is, Monster Fight is slow, plodding, and combat isn’t tense, quick, nor exciting. The major redeeming factor of Monster Fights comes from the well done backgrounds, pretty good character models, and lots of imagery that reminds me of World of Warcraft… which this game could totally take advantage of! “Smash, destroy, and stomp through ‘Orgribbar’, ‘Unda-City’, ‘and ‘Daleren’ and conquer the Scorge, Herde, and Alliantes”…. Or something less stupid. I didn’t feel like a monster while playing this game… and that is the major downfall of Monster Fights.