Even though the work is hard and neverending, this is one scrumptious free app. A restaurant sim that is one part Farmville to two parts Diner Dash, Tiny Chef does a phenomenal job of making the casual gaming grind tasty again to jaded palates.

I’m sure you’re probably sick unto death of the numerous freemium sims out there; I definitely am, but rest assured, Tiny Chef is something special. Part of it is the bright, polished graphics and the impossibly peppy music, but a bigger part is the incredibly addictive gameplay that just sucks away your time into an inescapable black hole of pure, concentrated mindless delight. 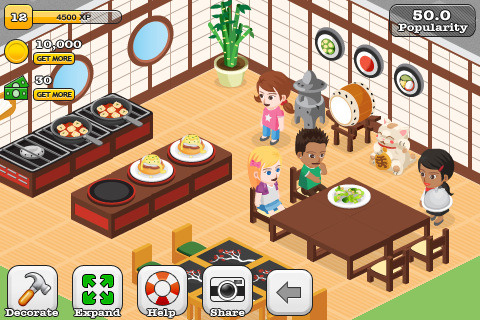 Although the game is called Tiny Chef, this is more about general restaurant management than cooking. Seeing to the customers’ needs and keeping popularity high are the big goals here, and you do that by making sure there’s enough seating on hand and that they’re served promptly. You can also customize the layout and décor, and it’s up to you whether you want to deck your place out like a hometown diner or fancy it up like a Parisian brasserie. 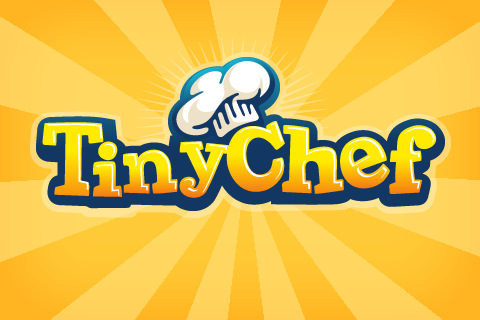 Of course, the food still plays a huge part. You’re responsible for selecting which dishes to serve, and there’s a wide range of recipes to unlock and select from. These all take different amounts of time to prepare, and you have a limited number of cooking stations, so you have to gauge things carefully if you don’t want to run out of food and have a heap of unhappy customers.

Helping you keep everybody fed and satisfied is your little fleet of waiters. They’ll go around serving and cleaning up after customers automatically, which takes away from the usual hustle and bustle of similar games like Diner Dash, but it’s a much more relaxed and welcome take on the action.

All in all, there were only a few things about the game that bothered me. First off, there’s no real tutorial, and while the game isn’t especially hard to pick up, it takes a bit of fumbling before you know what you’re doing. Second, the layouts feel particularly cramped with the one chair/one table approach, and it’s always a complicated maze-like ordeal trying to set up tables with enough room to seat and serve. Third, the server connection isn’t terribly stable, and I’ve had it cut out enough times to be annoying. And finally, the freemium “chefbucks” offerings are really outrageously expensive. I understand that this is how these kinds of games survive, but I sincerely hope there aren’t people seriously spending hundreds of dollars on this game.

But beyond that, I was really pleasantly surprised by Tiny Chef. It makes me hate myself a little for wasting so much time on such a useless fluff of a game, but I can’t deny its overwhelmingly hypnotic appeal.