For so many years, we have been misunderstanding our most happy of emotional expressions. Turns out, the smiley emoticons that we have been using so abusively have gone INSANE from being misunderstood. They can be pretty angry. Oh noes… Released by Nekoq.com, Angry Balls is available on the iPhone, iPod touch, and iPad for $0.99.

I can best summarize Angry Balls as Zombie Pool. You send angry balls flying off into their friends by holding your finger over them and pulling in the opposite direction that you want them to go. The longer the line you draw away from them, the faster and further your shot will be. The ball, a yellow CRAZY emoticon, is able to ‘convert’ other balls on the stage by touching them. They turn from their own personalities into CRAZY yellow ones and that’s pretty much how you beat a stage: Zombify all the other faces into yellow ones while avoiding spiky death or not being able to accomplish this within the allotted amount of moves. 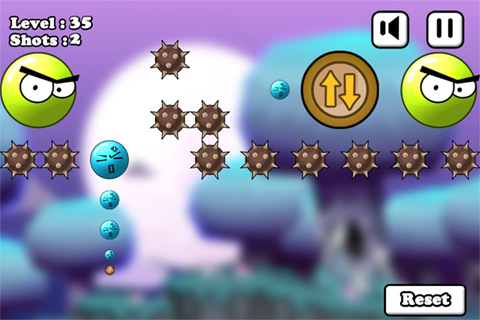 Artistically, the game is actually pretty good. That’s saying a lot for a game with mostly emoticons, flat, motionless icons, and blurry backgrounds. The interface in general is extremely clean and crisp and the different anime-style emotes that sprinkle the interface are cute. I especially like the Game Over crying guy… which I see constantly since I keep messing up my shots. 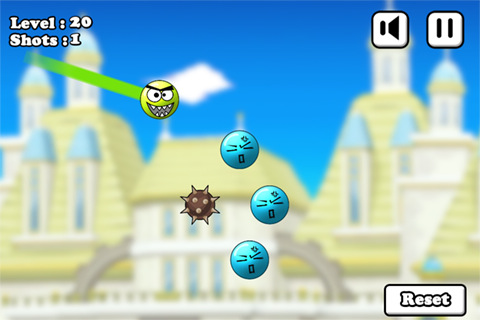 Each level in Angry Balls is challenging and requires careful shots and lots of ricocheting. Since you only get so many shots, small nudges won’t cut it in this game, so the challenge really hits a high mark by the higher levels. I was stuck for hours on level 36 personally, but I’m sure someone else can make it on one try. It’s all about care and patience, which I lack… luckily, my rage of constant defeat is soothed by the contrastingly odd classical music playing in the background. Though odd, I couldn’t help but like it.

Angry Balls was an enjoyable experience but I was never urging to play it. It just lacks that one addictive quality. Maybe some customizable abilities? Bonus lives? Add an extra move or two? Different customizable faces for your little zombie ball? I would have really liked some extra elements to make this truly a must play. As it is, I just feel like this is a relatively well done game, but it just doesn’t give me much reason to play it’s levels and spend any more time on this app. As it is, more is needed. More ANGER! MORE CRAZINESS! More dramatics? I just need more to play this game again after I review it.