If you ever watched the movie IT, you’d know the truth like I do… BALLOONS ARE EVIL!! They float around all innocently, but when you least expect it, a CRAZY CLOWN WILL COME OUT AND EAT YOU! …Ok, maybe not, but popping balloons might be therapeutic for me… Released by P-O-M Apps, Party Popper is available on the iPhone, iPod touch, and iPad for $0.99.

Party Popper is a “Bop-It” style game where you do specific actions for each different balloon that appears. You got round balloons that only require a tap, long balloons that require you to trace their shapes, spiraled ones that require you flip your phone, and a variety of other challenges. The balloons pop up (pun unintended) quickly and you have to deal with them accordingly. All of it is very fast paced and frantic due to a time limit that never seems to be long enough to hit higher levels. 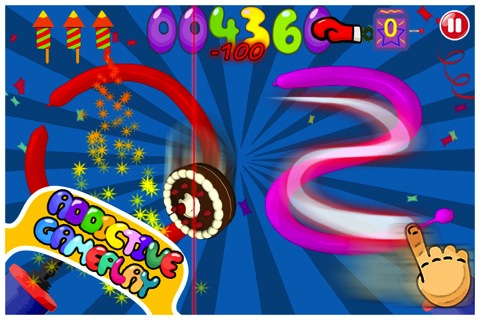 Artistically, there isn’t much to talk about for Party Popper. There are balloons that look alright. Most of them look like they just took a picture, and they might as well be since I have no interest in a 3D balloon… which are essentially a collection of capsule-3D objects joined together. There are bosses that, after popping all their body parts, grant you a 3D rotational art piece in the Bonuses and a random fact about the animal that the boss was. The game runs like a marathon, so in order to defeat more than just a single boss, you pretty much cannot make any mistakes. That is the biggest flaw in Party Popper. It’s just doesn’t give you a break. Instead of levels and reaching checkpoints, you MUST replay levels over and over again. This could last anywhere from 2 minutes to a half hour just to unlock boss balloons at later levels. 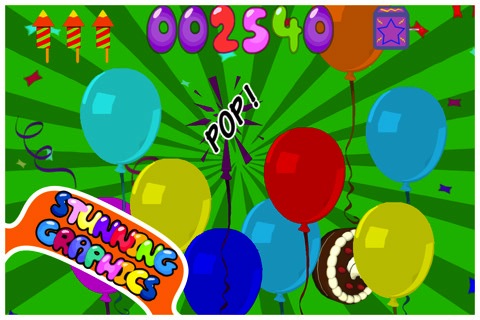 This game could have really focused in on the whole balloon theme by giving you instructions on how to actually MAKE some of those balloons. Maybe some techniques to unlock, levels to play so you can start off at specific points in order to unlock more bosses easier, and then maybe Party Popper will feel like it’s complete. At the moment, I just feel like this is a part of a full game… that’s impossible to play while charging your iDevice. I can’t even imagine how scary it would be to flip your iPad frantically by the way…

The pace is extremely fast and the graphics (for balloons) are well done. The marathon style gameplay is annoying however, and after a few long sessions with Party Popper, failing and having to restart at the beginning stinks of old outdated NES games. It just leaves a bad taste in my mouth… and that sucks because this has amazing potential at being a great way to make time fly by.