Fly Geek confuses me on so many levels. It’s the baseball minigame in Super Smash Bros essentially. You hit the Alfred Hitchcock guy with nasty weapons and then launch him with a power shot to send him flying as far as you can. Who knew beating up Hitchcock was so entertaining? Fly Geek, released by Plusonesoft Inc., is available on the iPhone, iPod touch, and iPad for $0.99.

I really just don’t get Fly Geek. There is something inherently disturbing about a dude on a bike with spikey weapons violently thwacking a bald, fat, half-dressed complainer. A bit too self-revealing of the people who made this app eh? Well, the game is simple enough to understand. You start off with the ‘Geek’ and a muscle-bound fire-haired rocker standing behind him. You hold your finger down on the screen and he prepares his weapon. Slide your finger across the ‘Geek’ and the dude swings and sends the geek flying off the cliff and he slowly falls towards the ground. The red head then rides in his motorcycle after the Geek and you have to tap the screen one more time to launch the geek as far as possible. Before you hit him and after the Geek stops bouncing, he says a quote like “Wanna buy a gerbil?” Or “This game sucks.” Irony isn’t it? 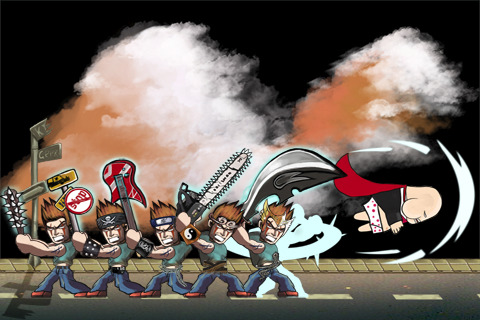 Graphically, this is pretty average. The character design on the red-headed angry guy looks good, with lots of details, shadowing, and decent character design. The Geek looks like he was drawn in a Flash introduction class with very little detailing and crazy-ugly design. Maybe this was on purpose, but visually it just looks sloppy. The backgrounds are mostly rough painted Photoshop elements, though the new Halloween theme looks really detailed and has some strong elements like silhouettes and decently done obstacles. It all averages out to just an ‘ok’. 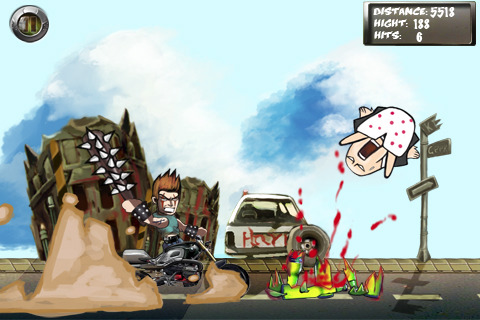 For the first couple of attempts at Fly Geek, I ran into a problem and I couldn’t figure out why. I just could not hit the second attack on the Geek to make him go flying. The instructions stated that you tap just as he is about to hit the ground but the window is incredibly small and the timing has very little give. You literally have to time it exactly or the Geek just bounces a few times and you have to wait to retry. After a few dozen tries, with only a handful of successful launches, I finally started getting more reliable launches, and that hits the next weird issue… the random level elements that send the Geek flying further to extend your distance record. Almost all of my launches end up having the Geek land harmlessly with no obstacles anywhere nearby to help the launch. Once in a while, he’ll get a boost on some fire or something but most of the time, it’s just a poor ending to a whole lot of trying.

After all of that, my basic opinion became “Why am I playing this?” Fly Geek confuses me. It’s not really fun, there is almost no real appeal since the title implies that I’m basically beating up someone’s coworker that they didn’t like or maybe a boss they were annoyed by in the past. The hyper weirdness and violence really aren’t interactive at all, and watching the geek hit obstacles isn’t that good because it’s always the same animations. What confuses me is people in the AppStore talking about how funny, challenging, or addictive this app is… really? Challenge in a game that runs on random? I just don’t get it. I just wasn’t impressed and comments about recent crashing issues (though I didn’t run across any on the iPhone 3GS) is not helping.