For some, the world of Harry Potter is less a cultural phenomenon than a religion of sorts. Having knit a few Hogwarts House scarves, I’ll admit I’m probably a step up from the average fan, although I’m not nearly as dedicated as a couple of my friends who regularly attend Wizard Wrock concerts and sew their own picture perfect costumes for conventions and film openings. Given the thriving community of wizarding enthusiasts, it should come as no surprise that Scene It? Harry Potter is targeted squarely at the enthusiastic super-fans out there.

Scene It?, the popular trivia game series, pulls no punches with this latest offering. Although the focus is on the films rather than the books, the questions are no walk in the park, and even the biggest Draco Malfoy fan might find themselves tripped up for not noticing a tiny clue hovering in the background. 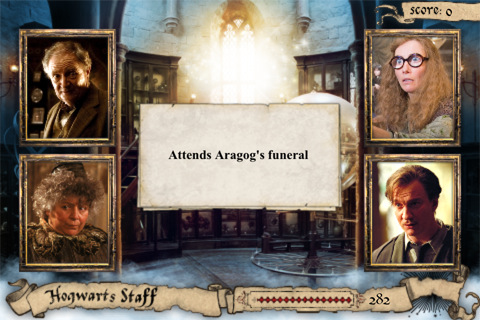 The questions themselves are quite varied and span all of the films to date, barring the most recent film, and they take a variety of forms. Some are more like simple puzzles where you have to unscrambled themed words, others might have you watch clips from the films and answer questions about them, while still others test your knowledge of screenshots, soundclips, and other Potter minutia. There are 16 different puzzle types in all, divided up into 30 distinct sets. Each set tests knowledge from all the films, so if you’ve only seen the first couple, you will quickly find yourself at a disadvantage. 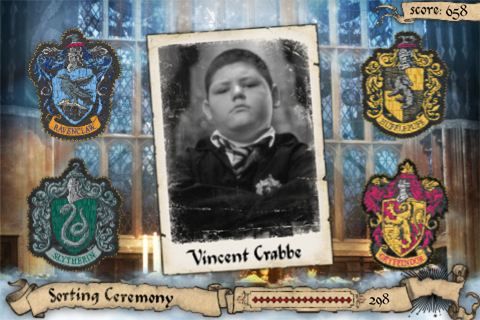 There are three different play modes: single player, multiplayer via WiFi or Bluetooth, and a Pass and Play mode to challenge your friends on a single device. The gameplay is basically the same for all three, but it’s nice to have options.

Less nice is the occasionally awkward touch interface. Most of the time this won’t be a problem, but particularly for the “unscramble the word” puzzles, the touch sensitivity combined with the tiny screen leaves a lot to be desired.

Even less nice is the blatant self-advertising sprinkled throughout the game. On the main menu screen and at the end of every completed game are links to other Scene It? games. And while player Facebook integration is a handy extra, obnoxious links to the Scene It? Facebook page are less welcome. It’s the kind of thing I might expect from a free app, but it’s just distasteful in a relatively pricey and big name app like this one. Parents in particular should be aware of the in-app store links thrust down their kids’ throats with this one.

Still, as expected from such a well-known game franchise, this is undeniably a very polished and professional app, with genuinely challenging questions and tons of shiny, licensed content straight from the films. It’s a no-brainer for the dedicated Potter fan who wants to spend some quality trivia time around the likes of Dumbledore, Hermione, and the rest of the gang.

Here is a video demo of the Scene It? Harry Potter app on the iPhone