I don’t know about you, but for me, starting at Thanksgiving to the end of New Years is the busiest, most hectic time of the year for me. So sometimes, it’s just nice to play a simple, no-nonsense game that both stimulates my brain and allows me to unwind a bit… Enter Holiday Match. Holiday Match is available by Random Pixel Games on the iPhone, iPod touch, and iPad for $0.99.

Let’s begin with gameplay because that is the main feature of Holiday Match. Here we have a Memory Match-Up Card game where you flip cards and try to find the pairs. Similar to those card games we used to play as kids before we knew how to play blackjack or poker, Holiday Match actually reveals the board to you and your goal is to memorize as many pairs as possible because randomly revealing cards on the board will just count against you. Yes, this game gives you 15 tries before you lose the stage. The only real way to get the high score is to push your memory and hit as many pairs accurately as possible. Your score can then be shown off through Facebook or Twitter to show your family and friends just how awesome you are! 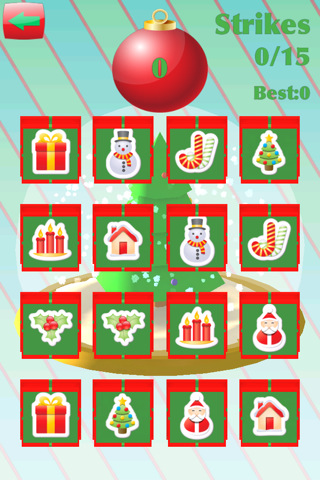 Graphically well, I’ll just say that I’m colorblind and the extreme reds and greens hurt my eyes, but overall, it has a clean Christmas theme with a snow globe tree and lots of different cards to flip and reveal. The little icons for the present cards are all very cute and well done, but again, it’s difficult for me to really see since the bright blinding red is painful. Would have really helped if the red had some dark gradients or some extra detailing on them to tone down the intensity.

This is a pretty nice game, but it has some lacking points. Motivationally, it lacks incentive for the player to continue playing besides score topping. Scores are fine and all, but entertainment comes from unlocking stuff, seeing that our actions actually result in something. I would have loved to see different presents unlocked like instead of a snowman, you can unlock the yeti box… and instead of Santa, you can unlock the elf box. Backgrounds and the 3D tree could start off small and sad (Charlie Brown) and you can slowly gather points to spend on upgrades for it. It’s almost always on screen, so giving it graphical upgrades would be really nice. Maybe a system to share your Christmas tree in Facebook and show off the tinsels, ornaments, and crazy colors you can customize?

Holiday Match is equivalent to those old cellphone games that came with the phone, but for a new technology. It’s fun but loses its steam after a few runs. It would be great to have new skins for different holidays like a patch in the future that upgrades it to a New Years theme? Valentines day? I’d love to see a support-the-troops style Memorial/Veterans Day theme where you can decorate a tank or something! Download Holiday Match and see how far it grows.