For those of you who can read Portuguese (Brazil), this is your game! Placar Cup is a Football (ie. Futebol/Soccer) top-down sports game with cute super-deformed characters and 3D graphics. Developed by Editora Abril, Placar Cup is available on the iPhone, iPod touch, and iPad for $1.99 and is only available in Portuguese, though the game can be played by anyone since it’s pretty self explainatory. Placar Cup is also integrated with OpenFeint and you can post to Facebook, and Twitter.

Soccer games have a mixed history of quality. Most simplified soccer games come with rather stereotypical gameplay. It’s usually top-down, you usually have issues with which character you are directly controlling, the enemy AI are usually wonky, and there are always ways to trick the AI like running towards one side and shooting hard diagonally into the goal from the other side. Does Placar Cup fall under these stereotypical issues? Yes. Yes it does. Gameplay very quickly boils down to running at the bottom or top of the screen, then when approaching the goal, since the goalie always follows you, you can kick towards the opposite end of the goal and the goalie will always miss the jump catch. You can also play this strategy for many hockey games too. 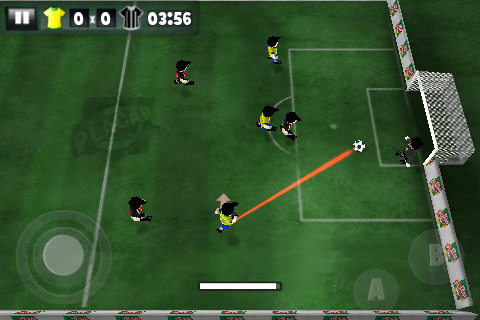 Graphically, the characters look good, though I wonder why they would choose as your default uniform the black and white shirt that makes you look like a ref. The characters have a fun, happy elf like appearance with a giant creepy smile. The arena looks great in 3D mode, but during gameplay the camera switches to a top down view so most of what you see is grass. Graphically though, this is a decent.

There isn’t a whole lot notable about Placar Cup. Characters all look the same with the same horrifying smile, the customization ends at t-shirt color and advertising icon to wear, and all the players play exactly the same. Run speed can feel slow and you have no control over which character you play as. Since there are 3 characters, the way the game is supposed to switch characters is by who is closer to the ball I find that 90% of the time, your controls rapidly switch between the 3 randomly and you will lose the ball often because you have no idea who you are at the time. 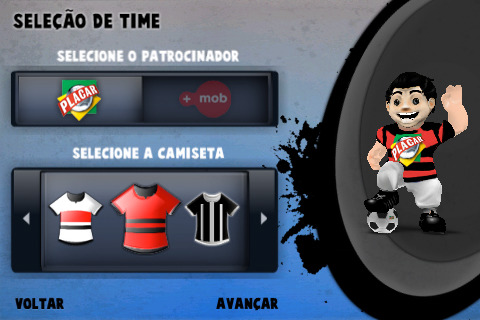 With the standard flaws, standard gameplay, and the lackluster customizability, Placar Cup sadly doesn’t quite reach great heights. After two games I was already bored… I played for an hour and felt myself desperately wishing to go to sleep. This app needs more. Customizable characters (and please let us change their faces), upgradable stats like run speed, shooting meter control, base kick strength, goalie upgrades, and finally, better controls with a more controllable player-switching mechanic. Until then, this is merely an average app. Soccer fans might find something fun in it though and I know that my lack of Soccer love definitely played a part in my opinion on this app.

Try it out for yourself and see how it plays for you!