Slalom Pilot is a gaming app that can be summed up in the app’s slogan, “simple game play that’s easy to pick up but hard to put down.” It was developed by Barry Pringle for Monioko for an iPhone (3GS or 4), iPod Touch (3rd or 4th generation), and iPad, and costs $0.99.

Slalom Pilot flies a single-propeller airplane through farm country while trying to avoid obstacles and aiming for slalom gates. The player gets a profile view of the plane as it flies through the plains. The controls for the aircraft are beyond simplistic as you touch the screen to fly up and let go to fly down; that is all, that is the extent to your control over the plane. 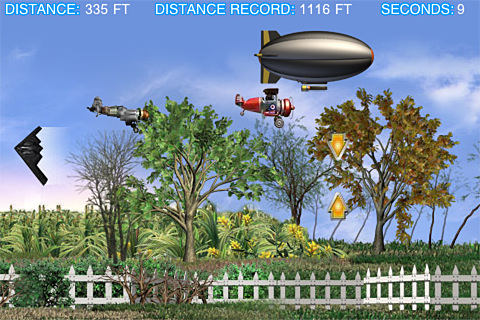 If you want a slight increase in speed you can bump the airplane off of the top of the screen before letting go to freefall. In some respects the simplicity of the control buttons is a beautiful thing because it allows you to touch anywhere on the screen in order to move your object. A lot of games I have played in the past have left me frustrated about the tenth of a centimeter that is the designated area for the controls. The margin for error is increased and the game becomes tedious after awhile of missing your spot. 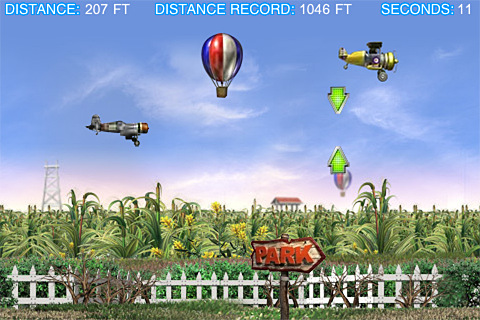 The obstacles set up to block your path include hot air balloons, jets, other aircrafts, and UFOs. Green arrows indicate the slalom gates, which also appear in your pathway but your goal is to fly through them to gain more time on the clock. The more distance you gain, the faster your aircraft goes. Your primary objective is to cover as much distance as possible as quickly as possible. As you fly through plush farmlands your distance in feet and the seconds are tracked in the upper left side of the screen. There is no pause button so once you start you cannot stop until you are up in flames.

Slalom Pilot is a great app game. It is simple, challenging, and fun. It does not seem like much at first glance, but it is sure to keep you on your toes.