CAPCOM has released Dead Rising Mobile bringing the console game to the iPhone and iPod touch. Dead Rising Mobile costs $4.99 and is available now in the App Store. Ready to survive zombie hell? The game starts out with an intro video that shows the news helicopter carrying the photojournalist Frank West over the zombie infected Fortune City and gets dropped off on the helipad. From there you’re running around the mall performing actions and killing zombies anyway you can.

The gameplay in Dead Rising on the iPhone is doe using an onscreen 4 directional virtual pad. You press up to run in the direction you’re facing. Use left/right to look around and down to turn around. Getting a hang of the controls can be difficult at first, for about 10-15 minutes before you can figure out how to maneuver. Along the way you have to eat food that you find on the ground to survive, or you’ll die. 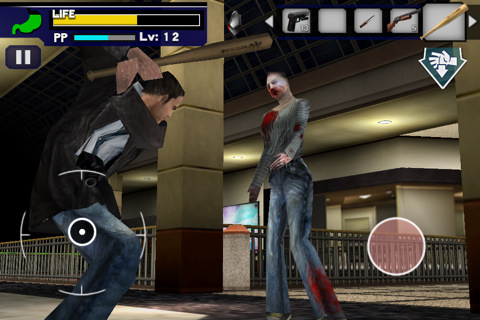 You start out with just your fist as a weapon and you’ll find more powerful weapons like guns, knives, blades, light sabers, and more along the way. When you see a down arrow it means you can pick that item up. Another neat feature of Dead Rising is picking up random objects in the game and using them as weapons. Things like trash bins, tables, and shopping carts can be used as one time weapons, so keep an eye out for stuff to pick up. Feel like looting? You can also run into stores and pick up merchandise to use as weapons, like golf clubs and pots and pans.

Dead Rising goes social, into the real world. If you deplete all your health and die, Dead Rising has a social feature to help you come back to life. Log into your Facebook or Twitter account and you can post updates to your real life profile asking your friends to revive you back to life. When a friend revives you, they get extra bonus points. If they choose to ignore you, you can rise as your own zombie in their game. 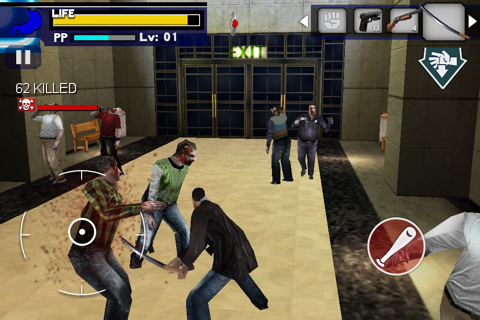 Your base station is in the safety of a vault. Go into the box to get news updates and missions to perform. A map of the Mall is provided at all times which you get to by pausing the game. This is useful for getting directions to your missions. An arrow on the screen points you the direction that you should be heading, though exploring the various parts of the mall can be very rewarding and fun for Frank.

Overall, the controls in Dead Rising on the iPhone can be tricky at first. The gameplay is quite engaging and dynamic objects throughout the game, combined with the social aspects make will definitely make this a CAPCOM title that is sure to rise in the zombie themed games genre in the App Store.