When living in an urban area, sometimes it takes a bit of fancy driving to get to your destination. It always seems like all the bad drivers are always on the road when you are–or you could be one of them. Then there are the street racers. With the coming of the fifth installment of the “The Fast and the Furious” series, Fast Five, interest in the road rebel sport could very possible spike once again.

Inevitable Games capitalizes on such an interest with their racing game app, No Brake! While the name itself is an exciting and dangerous notion, the game set-up is even more-so: imagine that you are in a car on the highway with a stuck accelerator and no brakes. Your speed is constantly rising, and of course, there are other vehicles on the highway and the police are after your speedster self. To maneuver through traffic, tap either the right or left side of your car to move across one lane in the respective direction. Crashing headfirst into another vehicle will mean the end of the game, and if the cops catch up to you, they will start pushing your car with theirs. You can push away other cars (including cops) with yours, but at the cost of some HP; watch for the flashing HP bar, as it indicates low HP. 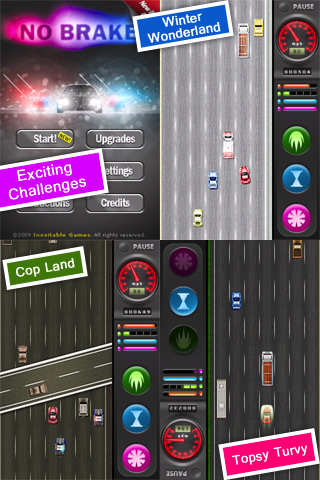 Luckily, you do have some special powers to help you win: Time Shift, Super Charge, and Shock-Wave, all buttons found on the dash to be activated. Time Shift slows time down for everyone but yourself, and is automatically regenerated when not being used (the rate at which it does so can be upgraded with achievement points). Super Charge speeds up your car for a short time and can only be used up to five times; a great side effect of this is that your car can survive collisions, even head-on. Tapping the Shock-Wave button will release its namesake, pushing away all cars surrounding you; this ability can only be used when fully charged, and its rate of regeneration can also be upgraded. 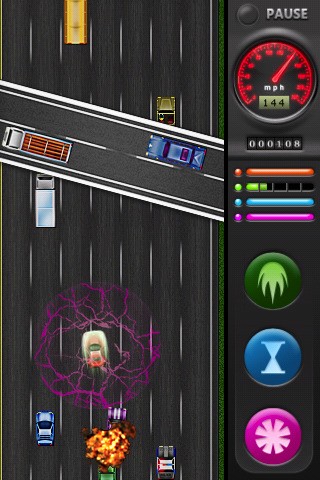 If looking to the dashboard is too much trouble while racing, you can activate all three powers by dragging up on the screen (Super Charge), dragging down (Time Shift), or tapping the car (Shock-Wave). In addition to the Leaderboard race, there are three Challenge game modes, in which you can earn even more achievement points. Achievements bring you better cars and powers, but unfortunately, Open Feint needs to be enabled in order to collect achievements. This was one aspect of No Brake! I did not enjoy, as I do not see why I can’t collect achievements without being public about it. Other than that personal quirk, No Brake! is a rather thrilling racing game that had me at the edge of my seat at times. The graphics are more detailed than I expected them to be, for a racing game, and I especially liked the use of space and colors for the dashboard. You have no control over the constant acceleration, so you’re free to concentrate on dodging and deciding which ability to use; the controls are very simple and there are no turns in the road, so you cannot possibly screw up on steering. No Brake! is a great game for only $0.99, so if you ever feel the need to appease your inner speed demon, this game would be on the list of top 5.