You are a pirate and after a stopping for supplies, your crew has become brain-hungry zombies! An evil Witch Doctor then runs off! It’s now your goal to control the zombies and take revenge!! Released by Rogue Pirate Ninja Interactive, Tower Assault! Curse of Zombie Island is available on the iPhone, iPod touch, and iPad for $1.99.

So, your crew has been transformed into zombies by a strange troll Witch Doctor… Use your brain shooting cannon to guide your dead friends and take revenge on the Witch Doctor’s village and finally take out the Witch Doctor; that’s the only way to free them. You control the zombie horde by touching the screen to fire your cannon at the spot. The cannon can… somehow… fire off brains and the zombies will head towards the brain and whatever targets you ‘tag’ with the brain. Towers and buildings can be tagged red by your brain attacks and the zombies will attack it. Your goal is to keep your zombie horde as large as possible and carefully guide them towards high priority dangers or goals without losing them all to arrow fire. It works relatively well, though I did find that the super zoomed out view really made things less exciting. 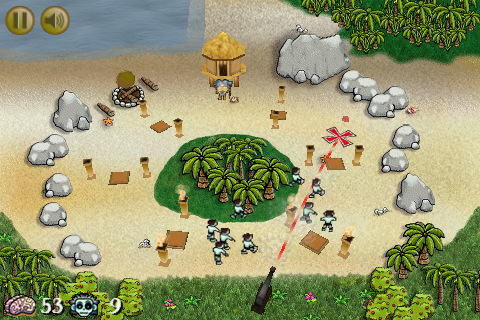 I think that Tower Assault! Curse of Zombie Island suffers from one major issue and that’s the lack of excitement. I never felt any real push or pull of emotions. There is a severe disconnect between how the game progresses and how much I actually care. The art is mediocre with some mixes of 3D that just does not work; the music is generic and really becomes forgettable background noise after a while. There is no leveling system or immediately noticeable impact of combat. Granted, this is a clever idea; reverse the Tower Defense genre and have you become the invading army. It’s a great idea but being pulled so far away from the action just makes me feel like I’m leading ants around. 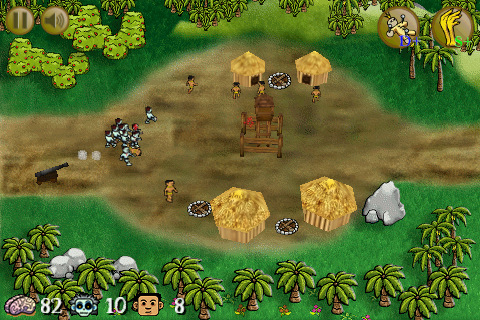 Eventually, you unlock amulets that grant you temporary power boosts, speed boosts, or other special buffs to your pale friends and that is when the game finally gets my attention. Seriously, the fun comes in from leading a group of zombies that actually move like they want to kill stuff… I’m not waiting for them to shamble around; I’m watching them rip a small village apart. This would be so much more exciting if the starting 10 was increased to like… 20 and the game progressed from there. Villages should have tons of enemies and only when you have available zombie-slots available, they will be recruited to your team. Otherwise, you can just destroy them all! Destroying the same towers over and over again, having only about 8 villagers on screen with your 10 zombies on a very large open map just feels boring. Like… hunting in “Oregon Trail” boring…

But still, with the power of the amulets and the fun of rampaging into a village with a higher number of zombies, the game kept my attention… though it still wavered constantly. Accuracy can be an issue, zombies get hung up behind walls and rocks all the time, and really, I just wish that I could choose stats for my zombie team, maybe choose classes? If you’ve ever played a Tower Defense game, you’d know that the enemies come in various species, usually with some having special immunities and they come in giant swarms against the towers. Tower Defense is exciting, so I want that excitement when I play a Tower Offense! Good try, but keep going Tower Assault!